Week Ahead – Dollar braces for Fed and NFP but will BoE steal the limelight?

The Fed’s long awaited tapering announcement will headline the coming week, with the October jobs report adding to the excitement. The Reserve Bank of Australia also has scheduled a regular meeting. However, it is the Bank of England that could roil markets the most as it ponders whether to raise rates early to fight burgeoning inflation. Employment data in Canada and New Zealand will be the other highlights on the data front, while OPEC’s monthly get-together is unlikely to yield any change in plans to normalize production.

The Reserve Bank of Australia has been pretty vocal in signalling the markets that it has absolutely no intention of raising interest rates before 2024. However, with lockdowns in Australia gradually being lifted as vaccination rates catch up with Europe and America, the economy looks set to make a big comeback in the next few months. In the meantime, inflation is on the rise, specifically, underlying price gauges have started to creep higher.

Although it may take some time before wages also start to head north in a sustainable fashion – a key criteria for the RBA – investors think this is only a matter of time and are predicting that rates will need to go up much sooner. Interest rate futures currently imply four rate hikes next year. Policymakers will probably try to push back against such expectations, but not entirely.

The RBA has allowed the three-year yield on Australian Government Bonds (AGB) to surge past its target of 0.10% in recent days, raising speculation that it may soon abandon its yield curve control policy. 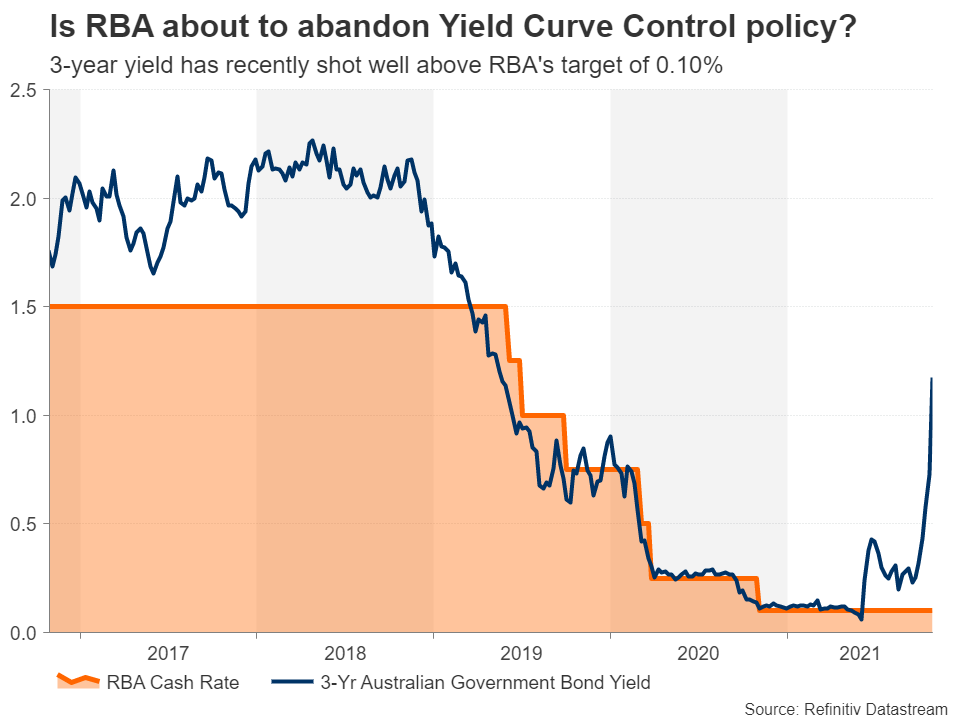 It’s not certain whether that would happen as early as the next meeting on Tuesday, but another option that cannot be ruled out is the further tapering of asset purchases. Such a move would be a major U-turn, with the decision having previously been postponed to February in response to the prolonged lockdowns. Although the virus backdrop hasn’t changed since the decision was delayed, the inflation picture has.

So at the very least, the RBA will likely flag some form of an earlier withdrawal of stimulus, which could power up already turbocharged AGB yields, boosting the Australian dollar.

The Federal Reserve is widely anticipated to announce that it will begin to wind down its massive monthly purchases of bonds and securities on Wednesday. Tapering could commence days after the meeting. But the decision has been so well telegraphed that investors will almost certainly be focusing their attention on Chair Powell’s press conference.

Bond markets have been confused lately, with short-term yields spiking sharply but long-term yields unable to keep up, leading to a flattening of the yield curve. The only way to interpret this is that investors think policymakers will be forced to act sooner on rates, but fragile economies will prevent them from hiking too steeply. 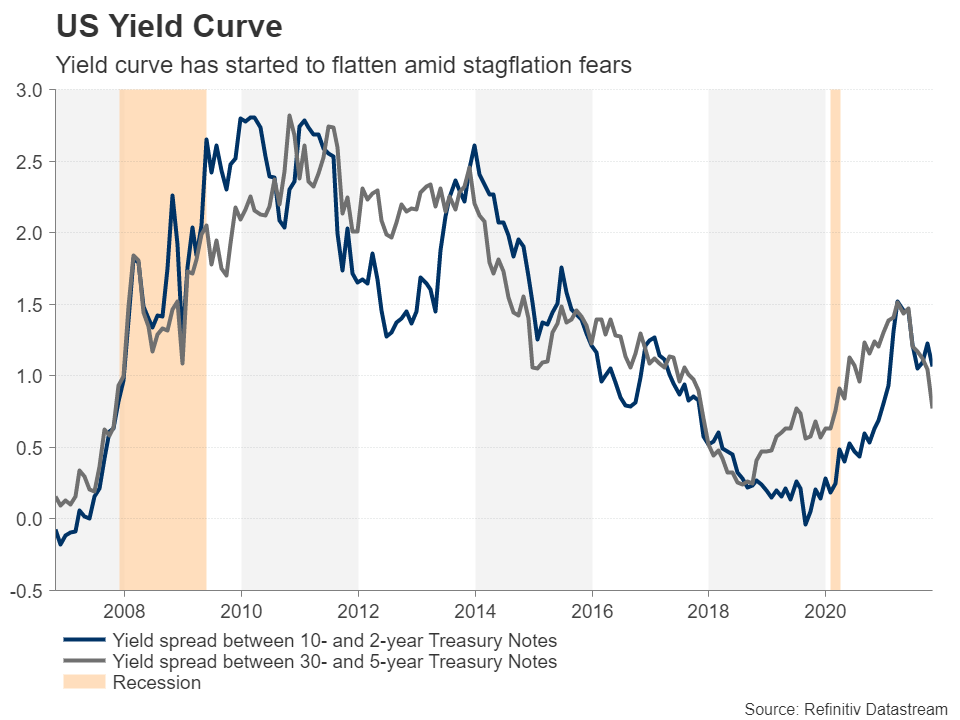 Although Powell will very likely want to steer clear of rate hike talk in his press briefing and emphasize the progress in the recovery while maintaining some caution, there might be clues on the timing of liftoff in what he says about inflation. Should Powell suggest that he is no longer so sure about higher inflation being transitory, this would add fuel to market bets that the Fed could begin to raise rates soon after tapering ends, which is expected to be in the middle of 2022.

But in all likelihood, the FOMC meeting might turn out to be uneventful and it is Friday’s payrolls report that jolts markets. The US economy is expected to have added 425k jobs in October – that would be an improvement on the prior 194k figure. After the recent surprises, another large miss or beat in the headline number is possible. Thus, the US dollar may only come alive at the end of the week, drifting sideways in the meantime. 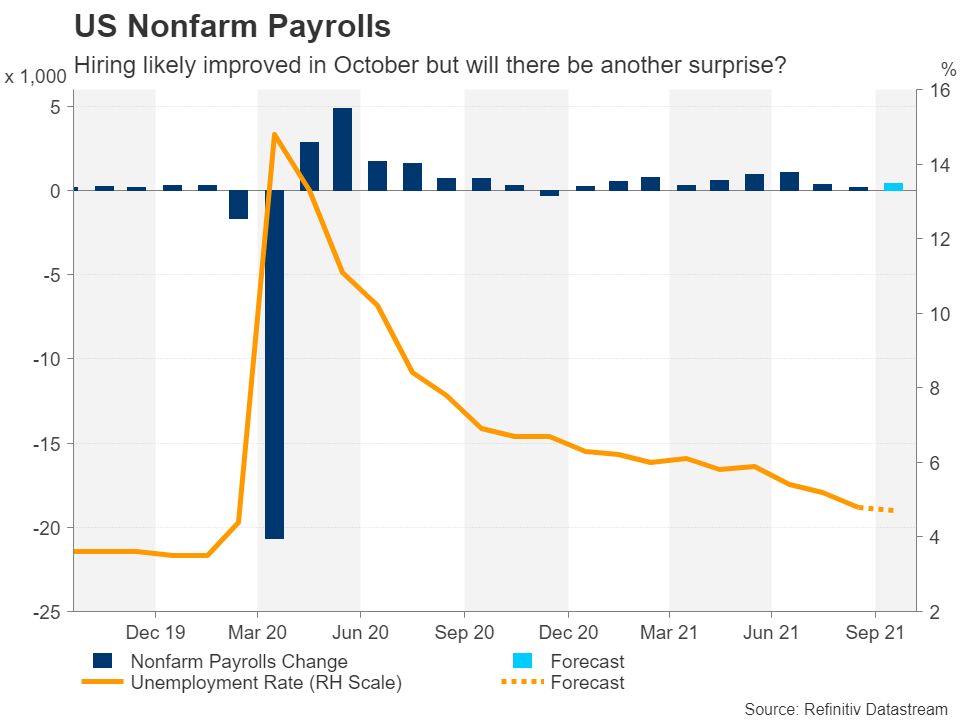 Bank of England: will they or won’t they?

Since the last meeting in September, the Bank of England has been unmistakably guiding market pricing for rate hikes higher. The repeated hints that a rate rise might become “appropriate” before bond purchases have ended – an unusual step in the world of QE – have pushed up the market probability of a 15 bps rate increase in November to more than 60%, with a hike by February fully priced in.

However, some MPC members do not yet appear to be on board for premature tightening action and the BoE doesn’t have the best track record for clear communication. So there is some risk that the hawkish bets have been overdone. 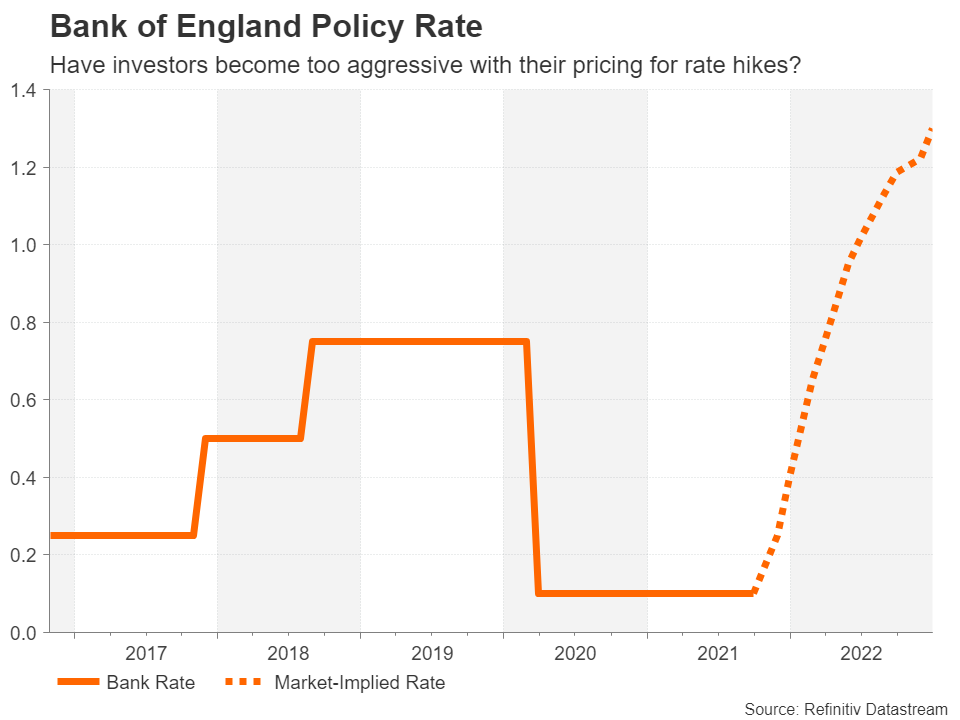 Economists are also unconvinced and don’t think that a change in the Bank Rate on Thursday is on the cards. But even if that turns out to be the case, sterling might not necessarily suffer a significant selloff. Concerns that supply constraints, worker shortages and soaring energy costs will be bigger headwinds for the UK economy than its peers have capped the pound’s gains from rate hike speculation.

A more dovish-than-expected meeting could even be positive for the currency as it would ease worries of tighter policy impeding growth. Either way, investors will be placing as much importance on the BoE’s updated economic forecasts, which should reveal how closely aligned the Bank’s projected rate hike path is with the markets’.

Oil slips ahead of OPEC meeting, weighs on

One central bank that hasn’t shied away from taking hawkish turns is the Bank of Canada. Having unexpectedly ended their QE programme early at the October meeting, policymakers now have to decide how soon interest rates should start to rise. Friday’s jobs report could help them do that. If there’s another strong jump in employment in October, it would underscore market expectations of a rate increase in early 2022, which remain ahead of the BoC’s own recently brought forward forecast of Q2/Q3.

However, despite the hawkish surprise, the Canadian dollar’s gains post the meeting have been marginal as a pullback in oil prices has countered the BoC-led advances. OPEC and its allies meet on Thursday to decide whether to stick to the pre-planned quotas and raise output by 400,000 barrels a day, or by a higher amount. The major oil producers are under pressure from the United States to ease supply curbs more quickly following the sharp rally in oil prices since late August. 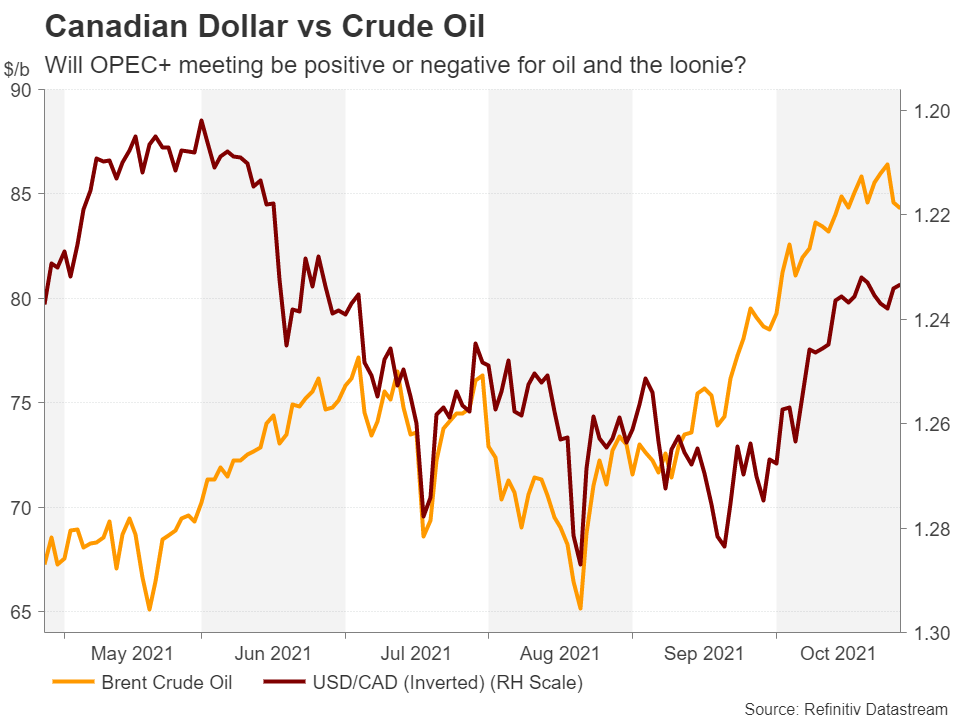 The OPEC+ alliance has so far resisted calls to pump more oil, with some members even struggling to meet existing targets. However, OPEC has a tendency to shock so a bigger-than-expected boost in output is a possibility, especially if Saudi Arabia has a change of heart. Another option for OPEC is to increase production by 800,000 bpd in November to ease the immediate fuel shortages but keep them unchanged in December.

Any surprise decision to raise output more than the predicted amount could spark a steeper correction in oil prices than the mild retreat seen in the last few days.