Even before the US presidential election was for Joe Biden on Saturday, investors were already signaling on Friday that they favored the impending power split between Democrats in the White House and a divided Congress, which would ensure that tax cuts and deregulation—strong tailwinds for some of the biggest market gains in a decade—remain in place. The edged lower on the final day of the trading week, but the broad benchmark gave up less than 0.05% at the close.

Friday’s down day ended a powerful four-day rally that provided equities their biggest weekly gain since April, after the dead cat bounce that followed the March bottom, adding $1.5 trillion to the value of shares.  As well, tech stocks continued to outperform, with the indices gaining every day last week, climbing at least 9% over the course of five days.

Selling The News But Buying The Expectation

According to one narrative, the broader market declined as Biden neared winning the presidency because indices were pricing out a Blue Wave that hadn’t occurred. On the other hand, the much-anticipated, massive virus relief package the Democrats were touting isn’t going to be so easy to pass with the current political divide. In the final analysis, Friday’s decline conveys the feeling of selling the news of a Biden win while the preceding rally may have been on the rumor, or expectation.

Economic releases last week offered some good news: the American economy kept growing despite continuing to hit of COVID-19 infections, after the US became the first country to top 100,000 new coronavirus cases in a day. The world’s largest economy created 638,000 in October, beating estimates that ranged from 503,000 to 600,000. declined to 6.9%, better than the expected 7.7% and down from 7.9% in September—the lowest for this metric since the pandemic began.

Though the better-than-expected jobs market didn’t seem to help the broader equity market, the tech-heavy NASDAQ indices appear to have been boosted by the stronger hiring in technology fields. Still, many economists warn that the jobs market is much worse than one Nonfarm Payrolls release suggests.

A broader measure, the , which includes those who stopped looking for work or compromised by taking part-term work, fell in October, but remained much higher overall at 12.1%. Economists consider this the real unemployment rate. In the final analysis, using this metric, roughly 10 million jobs—almost half of the 22 million that were been wiped out when the coronavirus hit the economy—have not yet been recovered.

Fundamentally it’s not completely clear why investors would have sold off risk ahead of the weekend after such robust gains during the week and an end to the election uncertainty in sight, but technicals could offer a reason why stocks would pause at this point. 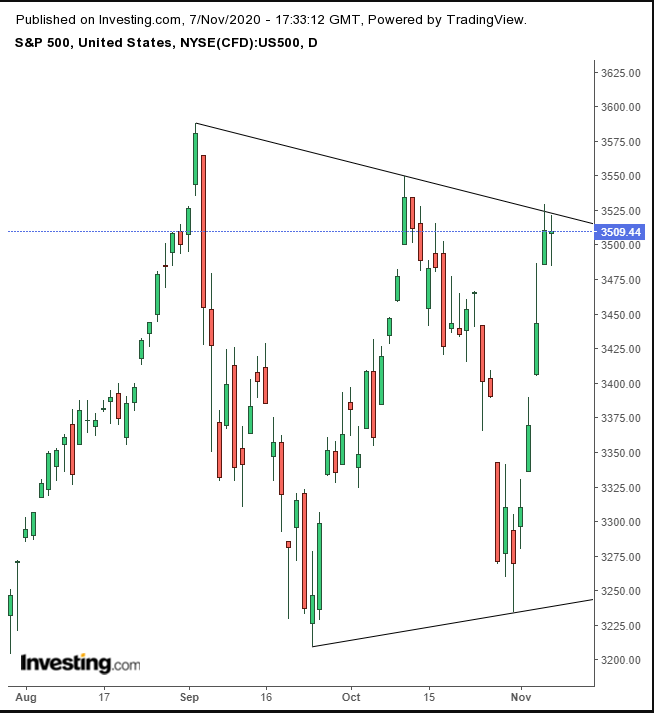 On Friday, the S&P 500 found resistance for the second day at the top of a symmetrical triangle. The price developed a high-wave candle, strengthening the bearish view.

Yields surged after the news that the labor market improved more than expected, including the note, whose yield bounced back above 0.8%. 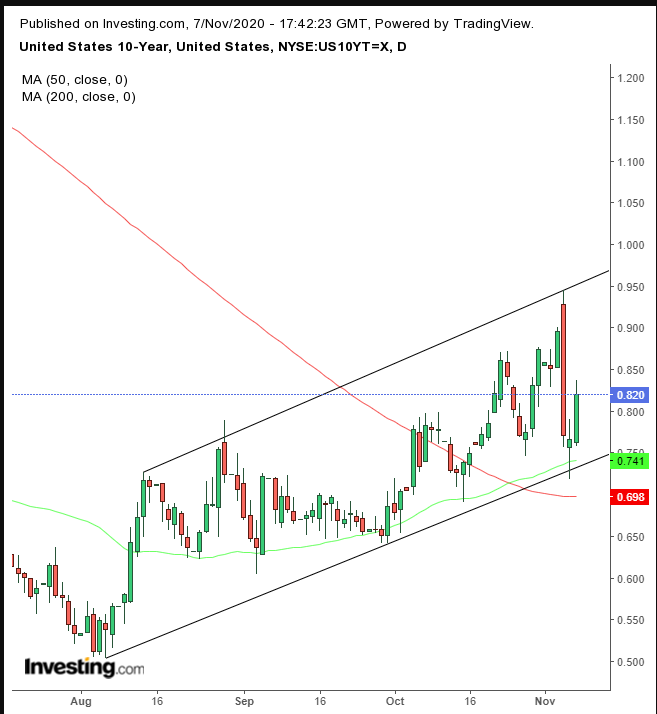 Technically, rates already found support by the bottom of a rising channel on Friday, supported by a golden cross, from where the yield rebounded.

The fell for a second day. It’s decline corresponded to the two days Treasuries were sold off. 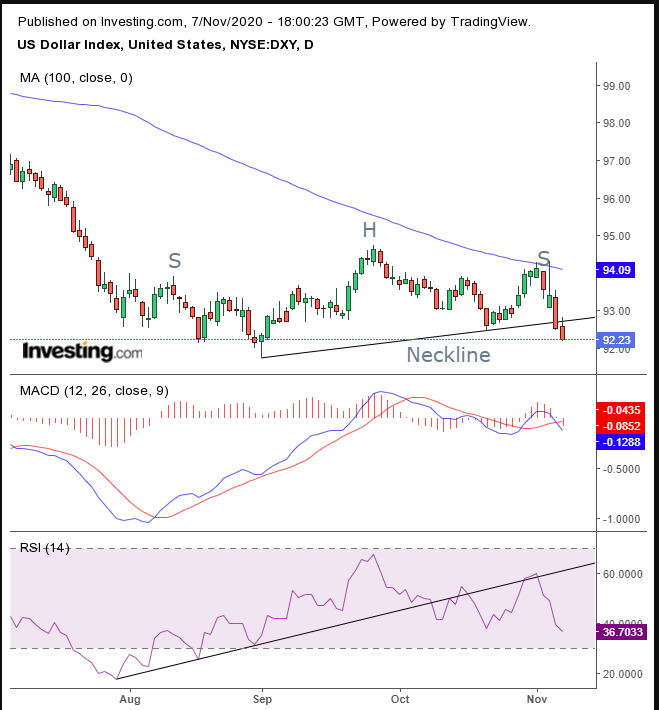 On Friday the greenback hit its lowest point in over two years. Speculation the Fed will increase QE turned traders bearish on the global reserve currency.

The dollar extended a downside breakout to a continuation H&S, signaling a resumption of the downtrend since the March high. The 100 DMA pressured the peaks of the pattern lower. The MACD’s failed rally mirrored that of the shoulder to the head, and the RSI found resistance by its broken uptrend line.

Dollar weakness boosted , which will further strengthen if investors seek to find a store of value other than the USD amid continuous central bank intervention. 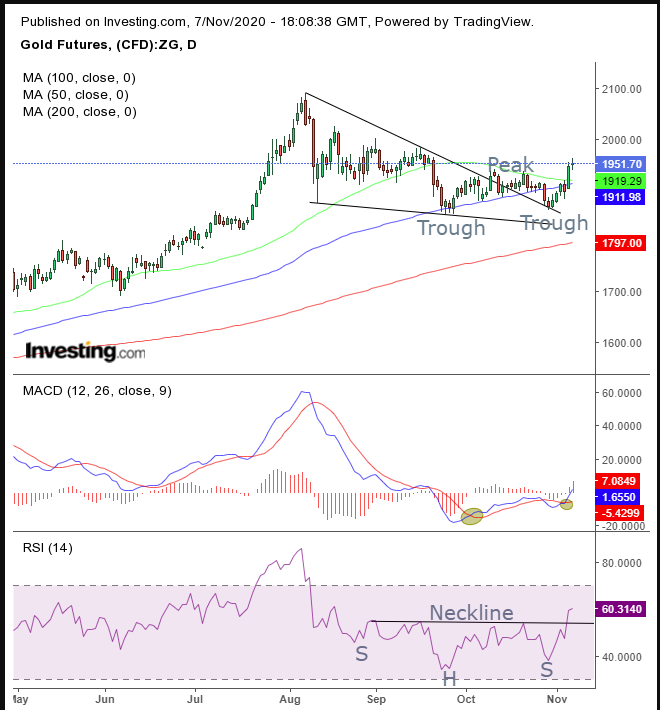 The yellow metal appears to have finally geared up enough momentum to return to rallying, after having bounced off the top of a bullish wedge, forming a short-term rising series of peaks and troughs. The price also cut through the 50 and 100 DMAs, after the 200 DMA seemed to support the wedge. The MACD provided a second buy signal along with the two troughs, and the RSI completed a H&S bottom.

, which is currently trading over $15K, didn’t benefit from the boost gold received from the weaker dollar and the expectation of looser monetary policy. The cryptocurrency fell for a second day.

To be fair, unlike gold, which has been treading water, Bitcoin has been for five weeks straight, its longest weekly winning streak since May 2019.

was buffeted by multiple headwinds, including Libya’s crude production coming back online after a civil war. The African nation’s output has surpassed a million barrels a day, even as lockdowns keep a lid on demand. As well, a Biden presidency is seen to potentially bring Iranian oil back into the market. 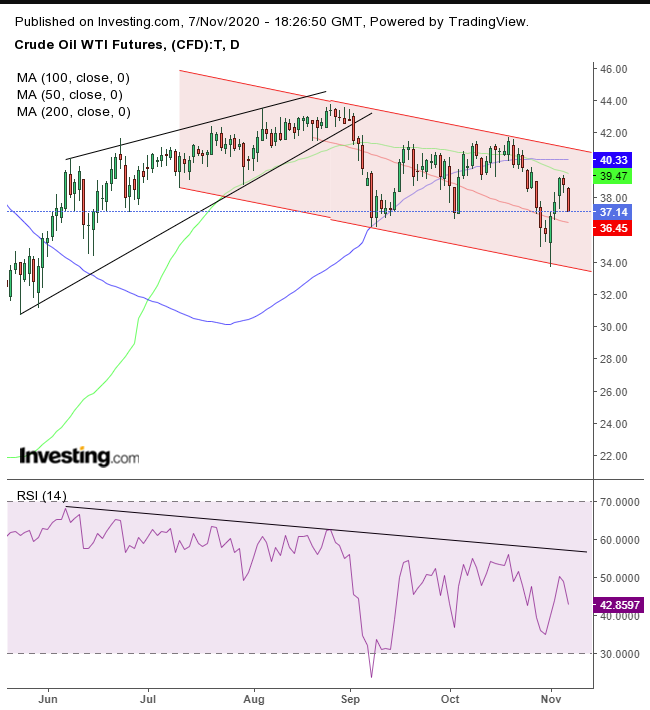 From a technical perspective, WTI is a downtrend, trading within a falling channel, after a bearish wedge. The RSI shows that momentum is falling as well.

20:30: China – and : the first is expected to remain flat, the latter to show a miniscule gain.