Week Ahead: Stocks, Oil To Keep Wavering On Lockdown Woe Vs. Vaccine Optimism


COVID-19 is likely to remain the dominant market theme in the coming, holiday-shortened week. The rising trajectory of the pandemic versus ongoing progress toward a vaccine will cause investors to whipsaw wildly between pessimism and optimism, driving markets lower or higher depending on prevailing sentiment.

Last week played out , when positive vaccine news dominated headlines, stocks advanced. But when the focus shifted to the unbridled rate of global and domestic contagion and stricter lockdowns, stocks sold off. Proving the point yet again on Friday, US coronavirus infections were the 12 million mark, with nearly 200,000 new cases reported on Friday, and stocks were mostly sold-off to finish the trading week.

Losses for some US indices deepened on Friday. The and both ended the week lower; the dipped on Friday but was still up 0.2% for the week. The small cap , however, remained in positive territory all week.

Adding to the already significant pressure on stocks, conflict over the use of Federal Reserve funds overshadowed any positive news from the pharmaceuticals sector. Thursday, Treasury Secretary Steven Mnuchin requested the Fed set aside for emergency lending, setting up the expiration of several relief programs by Dec. 31.

The Fed argued for extending “the full suite of emergency facilities,” and has no legal obligation to refund the Treasury’s investment. However, in a letter on Friday To Mnuchin, Fed Chairman Jerome Powell said the central bank will “work out arrangements with you for returning the unused portions of the funds.”

The rotation out of big tech shares, into sectors sensitive to an expanding economic cycle fluctuated throughout the week. This shift—between growth and value stocks such as those in the energy and financials sectors—will continue. Another type of rotation has also been taking place, a move into small caps and international shares and away from US large and mega cap stocks. Finally, there’s a third, less visible rotation also occurring, between different investment styles: a move into dividend income shares and away from capital appreciation stocks.

Pfizer (NYSE:) and German vaccine-development partner BioNTech (NASDAQ:) both gained after they submitted an emergency authorization request on Friday with the US’s Food and Drug Administration (FDA) for rapid approval for their coronavirus inoculation. 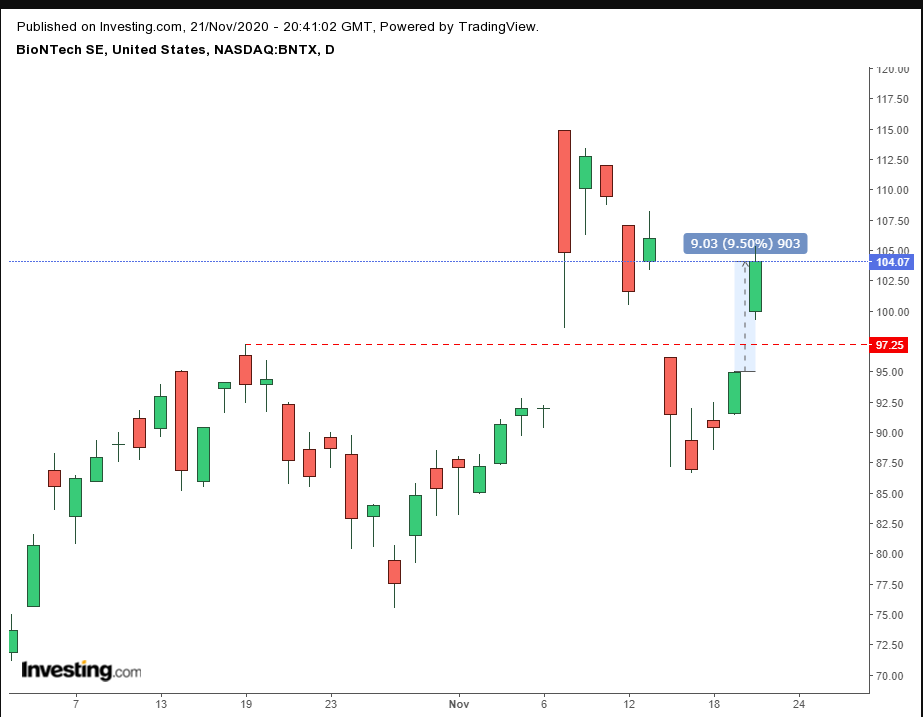 Technically, BioNtech soared +9.5%, completing a bullish Island Reversal. Pfizer, however, added only 1.4%, having given up a 3.1% advance.

Shares of Gilead Sciences (NASDAQ:) dropped after the World Health Organization (WHO) advised doctors not to administer the Foster City, California-based biopharmaceutical company’s remdesivir, even after the US FDA approved it for hospitalized patients. WHO said there was no evidence for improved patient survival. 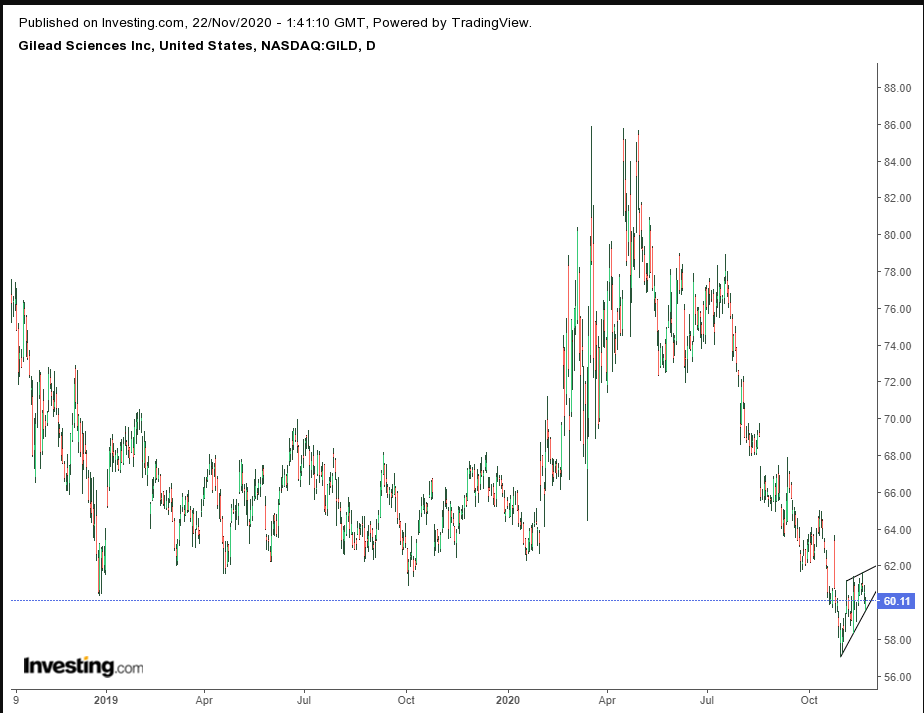 GILD price pressed against the bottom of a bearish flag, confirming the previous broken support, in place since Dec. 20, 2018.

Of course, we’ve been warning for some time now that whatever apparent progress pharmaceutical companies make in the fight against coronovirus, it doesn’t mean the worst pandemic in a century will magically disappear. Experts are predicting it will take four to six months at the very least for life to return to some sort of pre-pandemic normal.

Last week’s data was worse than anticipated, suggesting a choppier recovery than had been hoped for.

For all the volatility last week, the ended dropping for a second week.

Yields, including for the Treasury benchmark note, erased a weekly loss. 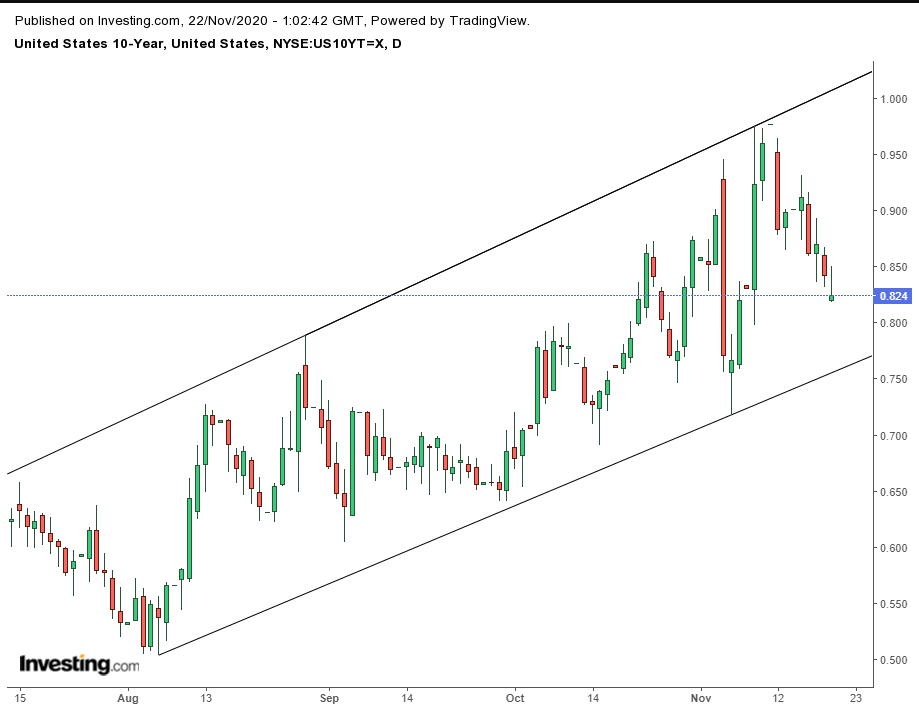 On Friday, rates formed an inverted hammer upon a return to the bottom of a rising channel, suggesting a continued rise.

The fell throughout the week. 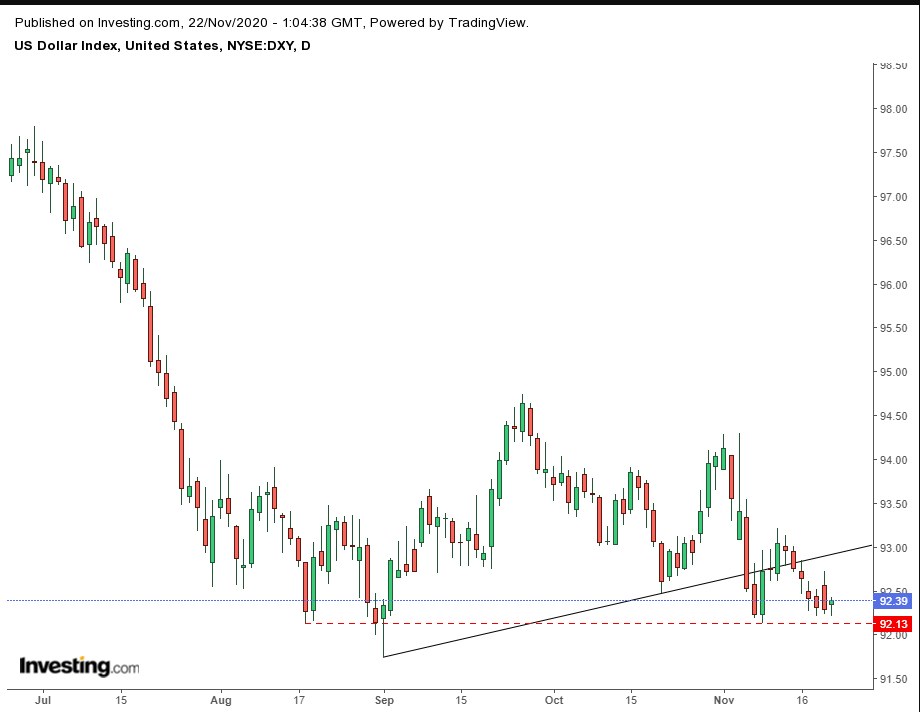 This strengthened the resistance of a H&S neckline but hammered out a support at the initial penetration’s low, which coincides with the lows before forming the neckline.

was up Friday but down for the week, even though both the dollar and stocks were lower as well. 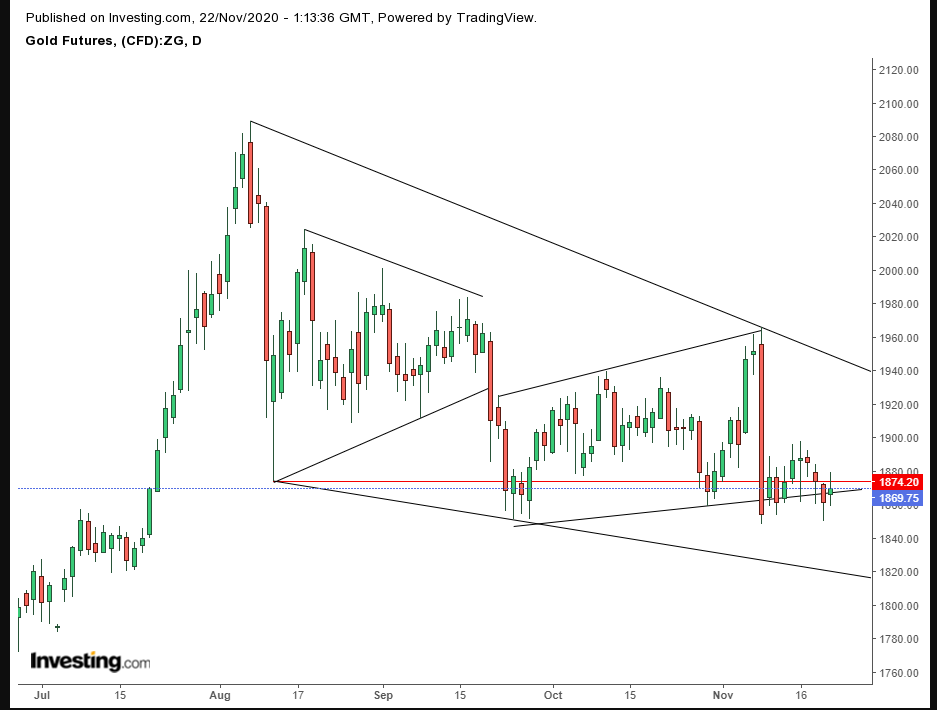 This is the second time we’ve noticed gold being sold off while it should have risen either on its safe haven status, when stocks were down, or on a falling dollar.

Also, technically, the precious metal continued to elude our calls; after shifting between different patterns we remain expectant of an upside breakout of a falling wedge.

extended an advance for a seventh consecutive week, its longest upside run since May. Last week, the digital currency gained 16.2%, its best week since June 2019. The cryptocurrency reached a three-year high, nearing its all-time record of close to $20,000, hit during December 2017. The upmove notwithstanding, Bitcoin overbought.

The Energy Information Administration reported that commercial rose by 4.3 million barrels to 4.887 barrels, while analysts had anticipated a drop of 913,000.

jumped 61.6 million barrels, bringing crude stocks to 81% capacity, or 76 million barrels. This is nearing its highest levels since April when a lack of storage space amid evaporating demand sent the price of oil into territory.

Nevertheless, the jumped on Friday, to lock in a third weekly advance on the hopes that the two recent vaccine developments will eventually help spur the global economy and thus demand. 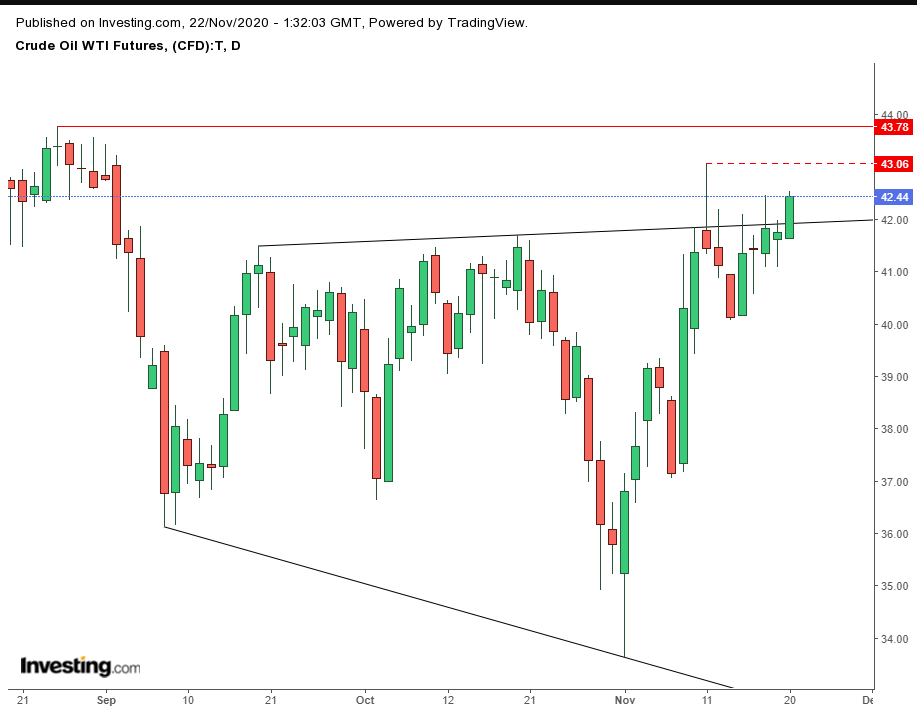 Technically, the price is forcing against the range top since Sept. 18. It needs to rise above the Nov. 11 shooting star and the rising wedge top to clear out any lagging supply. Otherwise, we expect it to return to the range, with momentum potentially pushing oil back toward $36.

US markets closed for the Thanksgiving Day holiday