Week Ahead: Stocks To Whipsaw On Rising COVID Infections Vs. Vaccine Progress


In the coming week, market will hinge on two opposing fundamental drivers, ongoing news of coronavirus escalation in the US where the outbreak is 200,000 new daily cases versus optimism for a vaccine that could put an end to the global pandemic.

On Friday, the and each hit new records as investors rotated into cyclical sectors. Days earlier, news from Pfizer (NYSE:) and their partner BioNTech, of a successful vaccine trial that showed 90% efficacy and the potential for fast track authorization of the treatment overshadowed lingering pessimism as the unrelenting COVID surge pointed toward stricter social distancing measures across the nation.

Global stocks, including those listed on Germany’s , the UK’s and Japan’s all registered a second week of gains, boosted by investor hopes the progress of a vaccine will put the global economy back on track. Risk-on appetite took hold with investors rushing into stocks that underperformed because of the pandemic, including equities in the travel, hospitality and banking sectors, which all suddenly seemed like bargains if COVID-19 were to no longer be considered a headwind.

An economic rebound would also favor cyclical stocks, after the technology sector—whose stocks now seem overvalued—carried the burden of pandemic-focused stock buying, thereby leading the rally up until now. The same rotation is in motion between US large caps and small caps and international stocks.

However, as we’ve said since talk of a viable vaccine first surfaced months ago, there’s a long road from proven safety and effectiveness in small trials to the significant scale-up required from drugmakers to manufacture the treatment in sufficient quantities for mass distribution, along with the logistics needed for global immunization. For now, the “results leave a lot of questions unanswered.”

Another theme that could potentially dominate stocks is the aftermath of the US presidential election. Though the counting continues in some states, with a few down-ballot races still unresolved, a divided government—with Democrats in control of the White House as well as the House of Representatives and Republicans taking the majority in the Senate—could be satisfactory for markets since this would likely keep Trump-initiated tax cuts for corporations and deregulation in place.

Right now the primary focus is on the Jan. 5, 2021 runoff election for two Georgia Senate seats since control of the Senate hangs in the balance. Should Democrats win both races, Congressional control would shift to the Democrats, which we suspect would reinvigorate market volatility.

As well, with an additional fiscal-aid package increasingly important amid a stall in the reopening of the US economy, any partisan disagreements that delay a fiscal response until January or later (the completion of the two Senate races followed subsequently by the presidential inauguration) would represent another potential source of market anxiety.

The Russell 2000, the laggard throughout most of the COVID rebound, and the SPX both notched record closes and all-time highs. The pushed back to pre-coronavirus levels, closing just 0.3% from its Feb. 12 record.

Only the and , which have been leading the rallies for as long as many market participants could remember, didn’t score, as investors continued to unload their tech holdings. Zoom Video Communications (NASDAQ:), the stock that perhaps best exemplifies a winning bet during a stay-at-home environment, and which catapulted nearly 600% higher since the pandemic became prominent in March, plunged 5.85% on Friday. 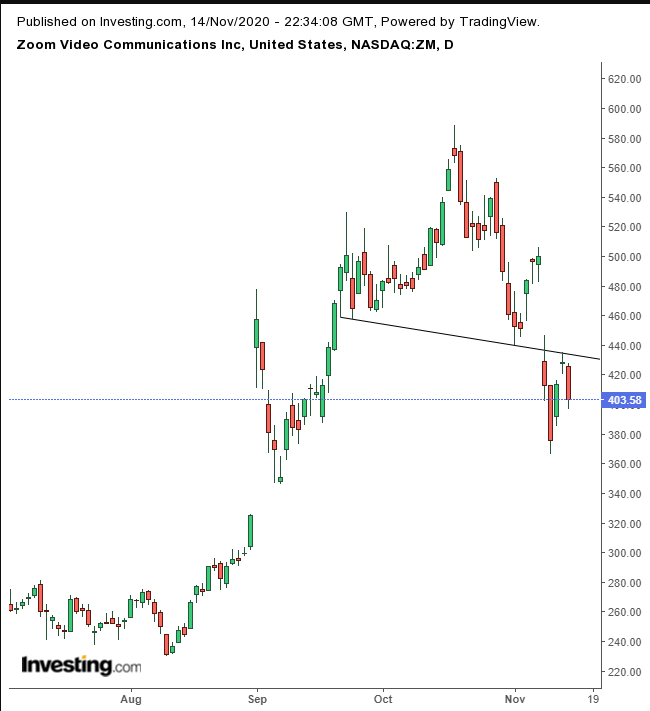 From a technical perspective, the drop confirmed a H&S top.

Disney (NYSE:) shares climbed 2.1% after a solid . Cisco Systems (NASDAQ:) jumped 7%—bottoming out with a rising gap, completing a V-bottom—on strong sales guidance. Tesla (NASDAQ:) declined 0.8% after CEO Elon Must tweeted he may have been infected with COVID-19.

DoorDash, the biggest food delivery platform in America, filed its S-1, as it closes in on its long-intended IPO.

Yields, including for the US benchmark Treasury climbed to their highest level since early March. 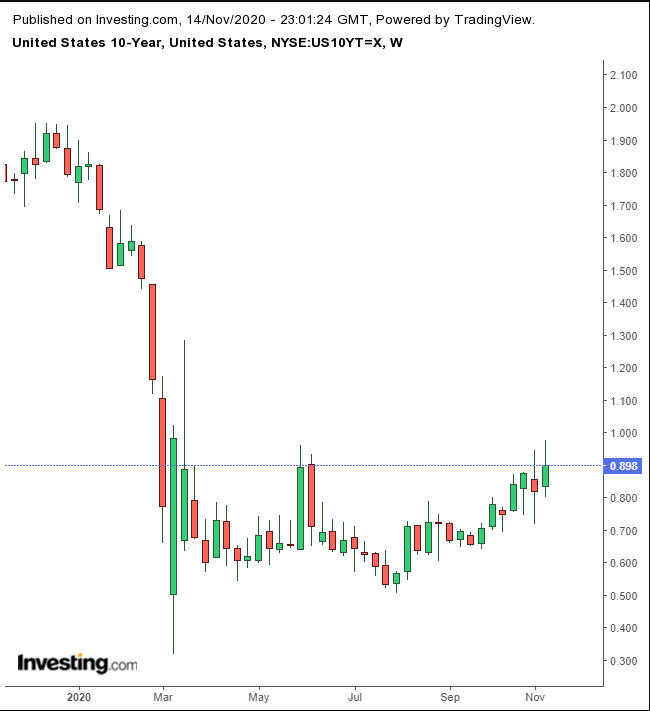 It’s the third week out of four, that rates have been rising, though they’ve given up weekly highs.

The closed slightly below either the neckline of a H&S continuation pattern or a symmetrical triangle on Friday. 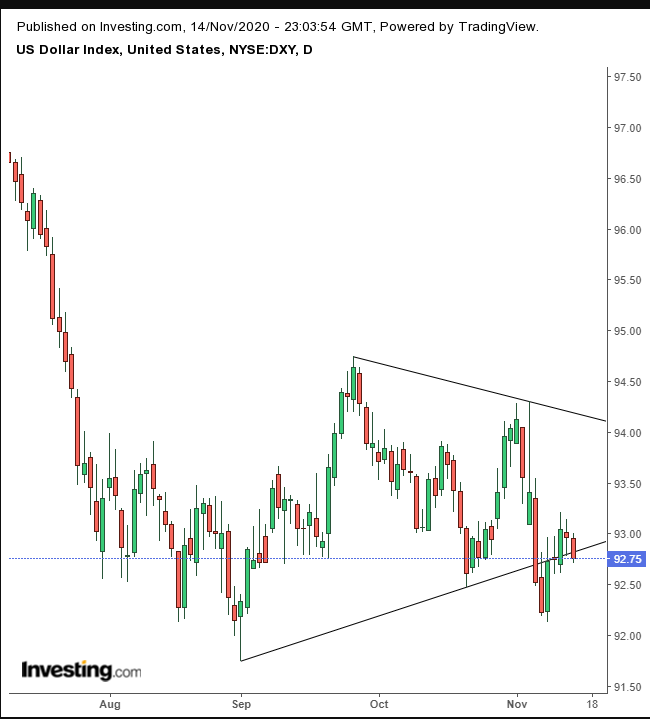 Either way, it signals a resumption of the underlying downtrend.

climbed for a second day on dollar weakness. 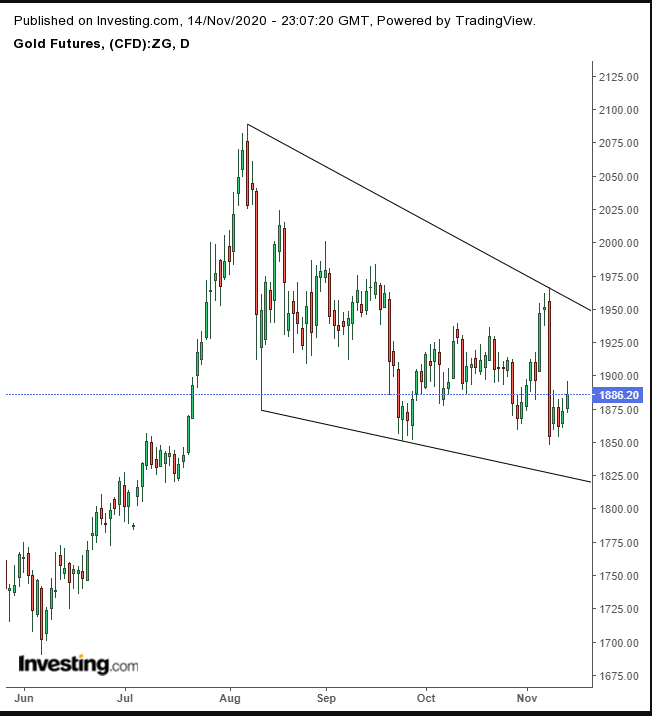 The yellow metal has been playing games with us all, having slipped via patterns that did not follow through. It may be forming a yet larger falling wedge. A decisive topside breakout should signal a resumption of the uptrend.

fell for a third straight day on Friday. 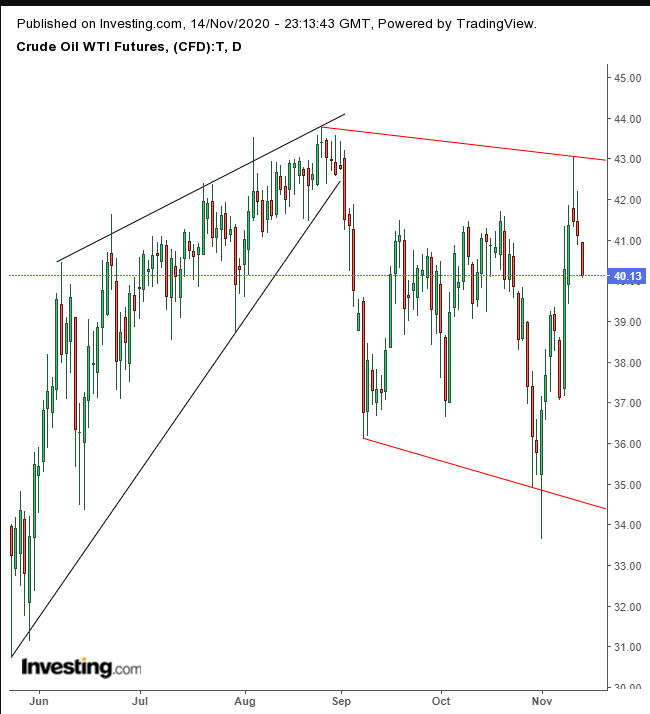 This confirmed the powerful shooting star that confirmed that rising wedge’s resistance, signaling the price might retest the bottom of the range at the $35 level, and possibly lower, if it resumes the downward bias of the range, as sellers’ eagerness overcomes that of buyers.