The market narrative has investors repositioning for the growing possibility of an outright recession amid the most aggressive path to tightening since the 1980s. Accordingly, the the most since 1981 – a recession-leading indicator.

The popular opinion is that November’s robust stands in contrast to an economic decline. However, I would argue the reverse: the more new jobs are created, the further the economy will overheat, allowing, if not forcing, the Federal Reserve to keep , thus increasing the odds of a recession. .

Investors are grappling with how much the stock market has already factored in a recession. Since 1950 the average recession selloff has been 29%.

The has lost a quarter of its value from its all-time high this year – the average decline. However, in the 26 bear markets since 1929, the popular gauge shed 35.6% over an average of 289 days, or roughly nine and a half months, according to financial institution Hartford Funds.

Irrespective of the fundamentals, I have been providing bearish calls since the market topped out technically. 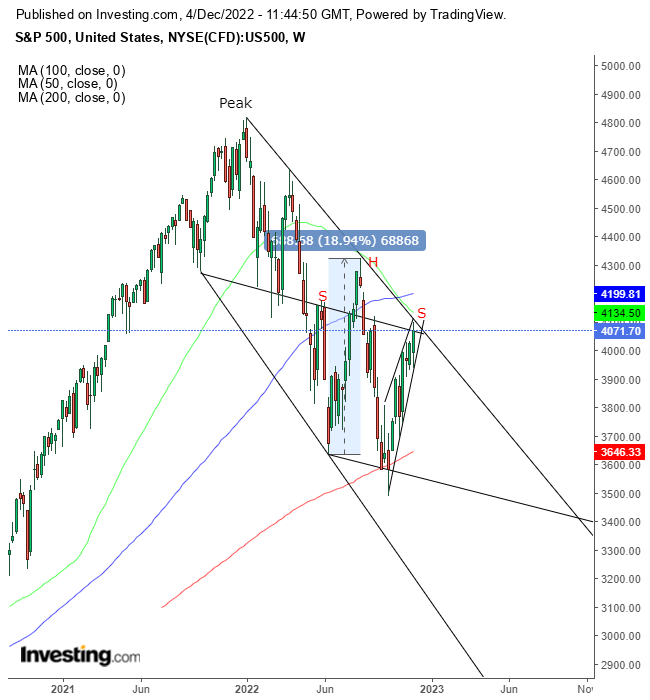 A strict reading would characterize the current medium-term trend as sideways. However, if the short-term rally completes the rising wedge with a downside breakout, it will retest the October low. If it falls lower, as I predicted, it may form a head-and-shoulders continuation pattern, implying a near-700-point downside move from the breakout point – which is difficult to determine given the downward-sloping nature of the neckline – mirroring the H&S top above.

In examining the S&P 500 sectors, I am seeing that technology and communication services have been picking up in the monthly and three-month timeframe. Will their short-term rally be the beginning of a reversal? I don’t think so. These growth stocks are rising because the market has been risk-on in the short term. However, if the medium-term downtrend resumes, they will fall again. In the six-month and year-to-date views, the technology sectors are underperforming, and industries that would do better in a recession are leading: consumer staples, utilities, and healthcare.

The dropped Friday after Chicago Fed President Charles Evans said the central bank would probably tame its rate increases. On the other hand, Evans warned that the Fed might need to raise rates “slightly higher” than what had been anticipated in September. The dollar shed 6% of value in November, making for its worst month since September 2010, as traders reversed positions according to expectations for a slowing rate hike. 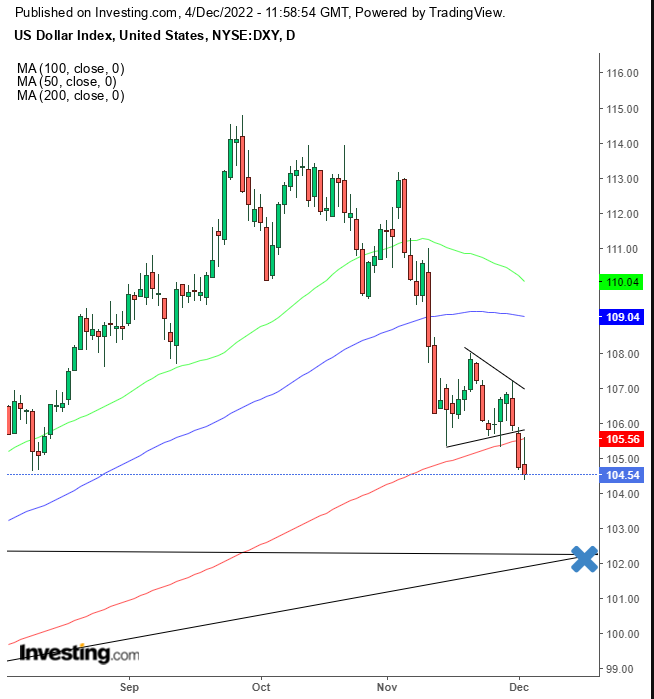 The dollar completed a bearish pennant, implying the greenback will test the psychological round-number level of 100. However, beware of the dual support of the trendline connecting the highs since 2017 and the uptrend line from the June 2021 low.

surged 1% on Wednesday as the central bank may slow hikes “as soon as the .” At the same time, he warned that is not over (the Fed’s preferred gauge for this is the ). Still, the robust employment data on Friday pushed gold from a four-month peak – but there could also be technical drivers. 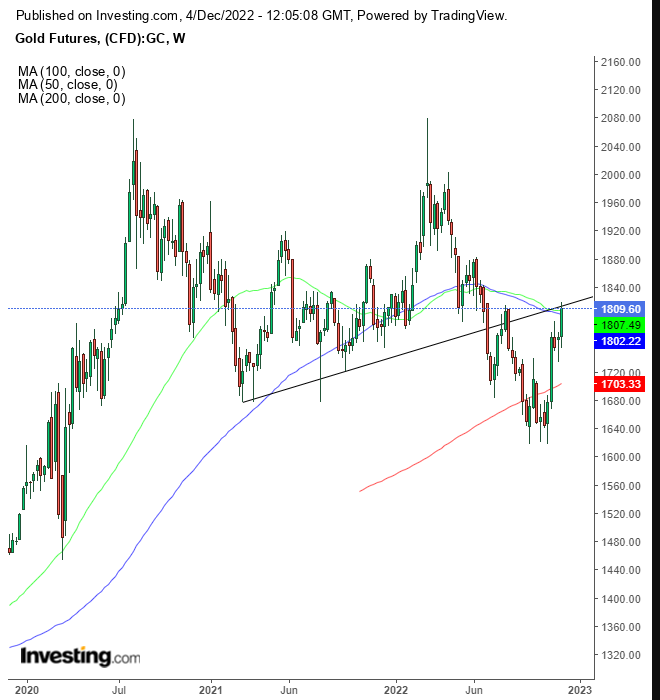 On the daily chart, gold formed a hanging man on top of the 200-day MA precisely at the August highs, confirming the potential for a reversal after it fell below the uptrend line for the first time since March 2021.

As aforementioned, Powell said on Wednesday that interest rate hikes will likely slow, but the Fed will keep raising rates, and inflation will continue to climb. Employment numbers have shot up, showing just how strong the economic growth is – and growth is not beneficial for inflation in a Keynesian economy. If you’re confused about the fundamentals, you’re in good company. What is almost inevitable: We can expect choppiness in markets.

Disclosure: At the time of publication, the author had no positions in the securities mentioned.

Looking to get up to speed on your next idea? With InvestingPro+ you can find

And a lot more. Get all the key data fast so you can make an informed decision, with InvestingPro+. Learn More »

Facebook
Twitter
Pinterest
WhatsApp
Previous articleDave Ramsey just blasted US universities for promoting online gambling to students — and reaping millions in fees. Why young people are the perfect prey
Next articleBybit announces second round of layoffs in 2022 to survive bear market By Cointelegraph