US contracts on the , , and retreated and European stocks, including the , fell to a month’s low on Monday, at the start of a busy earnings week as US COVID-19 cases hit for the second day in a row.

Last week, the bulls’ grip slipped from a rally that had lasted three straight weeks. The most visible driver was the continued ups and downs of stimulus talks ahead of the fast-approaching Nov. 3 elections.

US yields reached their highest in four months as traders bet that former Vice President Joe Biden will win the Presidency and Democrats will win both the Senate and Congress. This emboldened bulls for two reasons:

Although stocks closed lower for the week, economic data was encouraging to the long-term outlook, as fell, and expanded.

The receded 0.53% last week, after a more than 10% move from the low of Sept. 24 and the high of Oct. 12, but the drop should not be considered a decline. The index behaved in an orderly fashion, fluctuating in a narrow band, showing demand was still robust, propping up prices. Let’s see what that looks like on the chart. 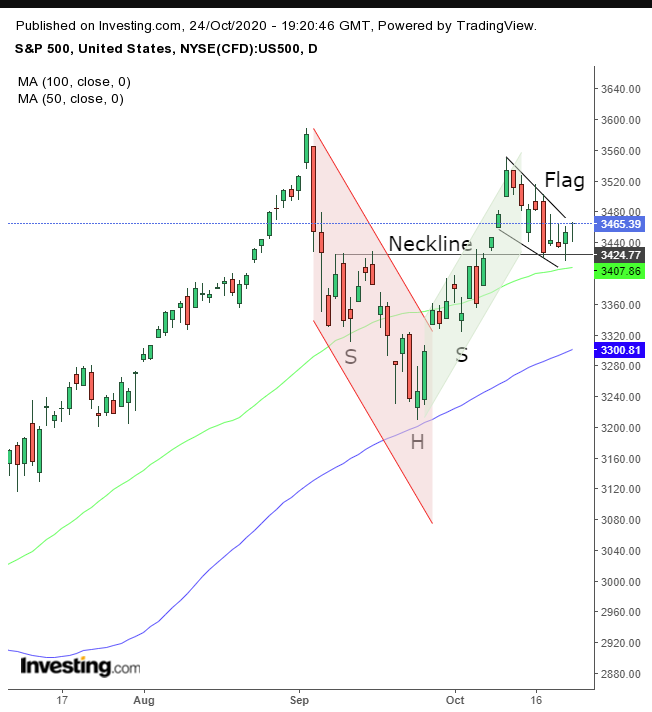 The stock index has been trading within a falling flag—a tight range with a downward bias. While its declining fashion may strike an inexperienced observer as bearish, it is a good thing. It shows that sellers are selling all their contracts, and the gauge is still not falling, because there is sufficient demand to absorb it. That’s why it’s considered a bullish pattern, but a buy signal is given only after an upside breakout.

But this isn’t just a bullish flag, it follows a H&S bottom, which shows that after sellers dictated the trend, buyers took over and pushed it back up—a bullish pattern.

Moreover, we don’t just have two bullish patterns one after the other, but the flag has found support at the neckline of the H&S bottom—the highs of the bottom—demonstrating its support. In this way, the two patterns are working together, both confirming the bullishness of the other.

While these two intertwined patterns provide a very bullish outlook, the fact that it is only one week before the US Presidential election means stocks are moving in a range which may demonstrate that investors are waiting for the voting outcome for an explosive move. These elections are more momentous than any in memory as they are taking place against the backdrop of a global pandemic which has resulted in House Republicans and Democrats batting over an economic stimulus.

The risk-off had investors racing into Treasuries, including the , for safety pushing yields lower. 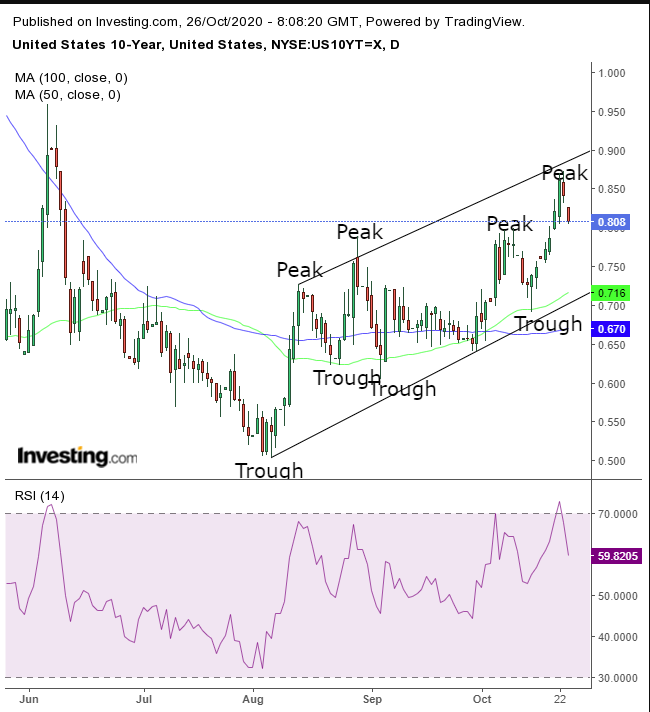 The fall in yields consists of a corrective move within an uptrend as framed by the rising channel, after the price reached its top and the RSI became the most overbought since early June.

If we see the forecast blue wave in the election results, where the Democrats win the White House, the Senate and Congress, the is expected to weaken for two reasons: 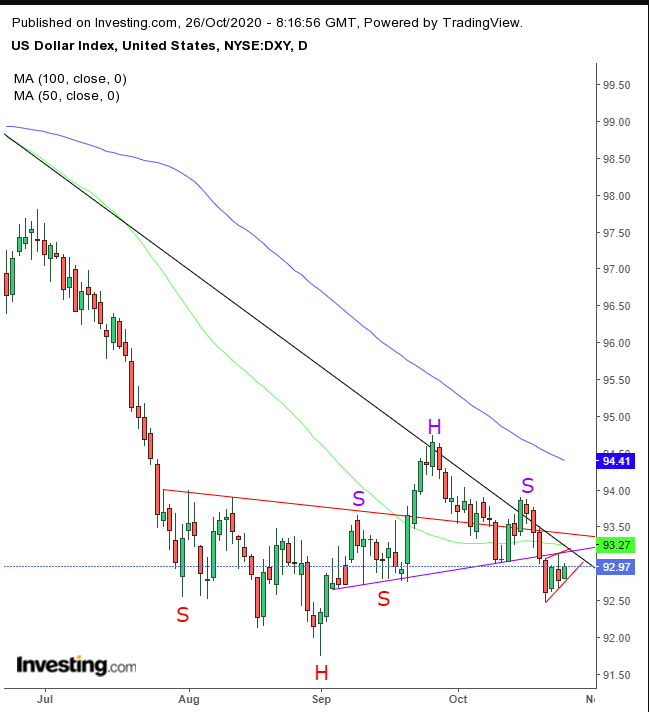 The dollar is on the rise, making it the fourth day of ups and downs, forming a potential rising channel, bearish after the four-day straight selloff that preceded it. It makes a lot of sense that there will be another setup for another leg down as the flag pole—the move before the flag’s formation—was itself the downside breakout that completed a H&S continuation pattern that upended the preceding failed H&S bottom. The picture favors a continuation of the underlying downtrend since the March peak. 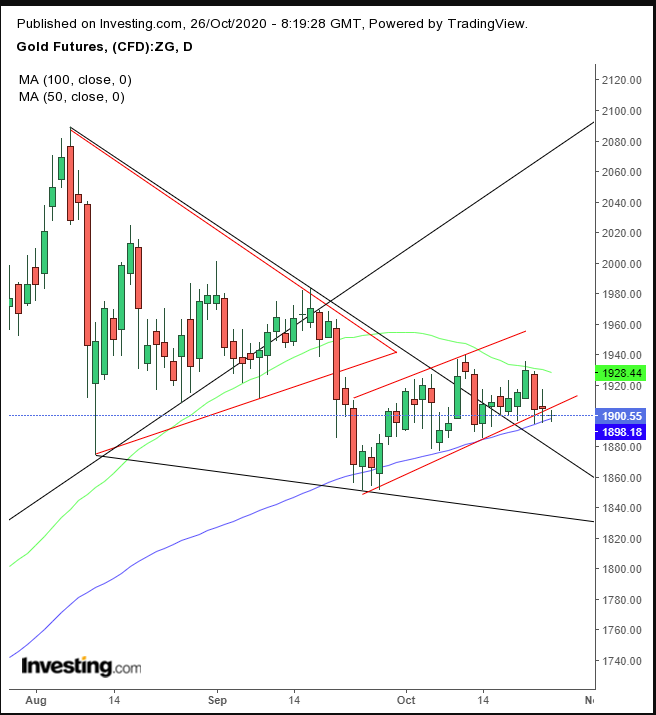 Gold has been eluding investors since Sept. 21, when it broke to the bottom side of a symmetrical triangle, instead of to its topside within the uptrend, falling below its uptrend line the March lows. Then, it completed another bearish pattern, a rising flag. However, enveloping both these bearish patterns is a large, falling wedge, bullish after the uptrend.

While the price climbed above the bullish wedge, it remains within the bearish flag—demonstrating how unsure investors are and that they may be waiting for a Trump win in the election to send gold higher or a Biden win to send it lower.

Notice how the price is squeezed between the 50 and 100 DMAs suggesting a break in one direction will create momentum for a larger move.

After more than hit our flag’s and its RSI showed that momentum reached the most overbought condition since Aug. 1. 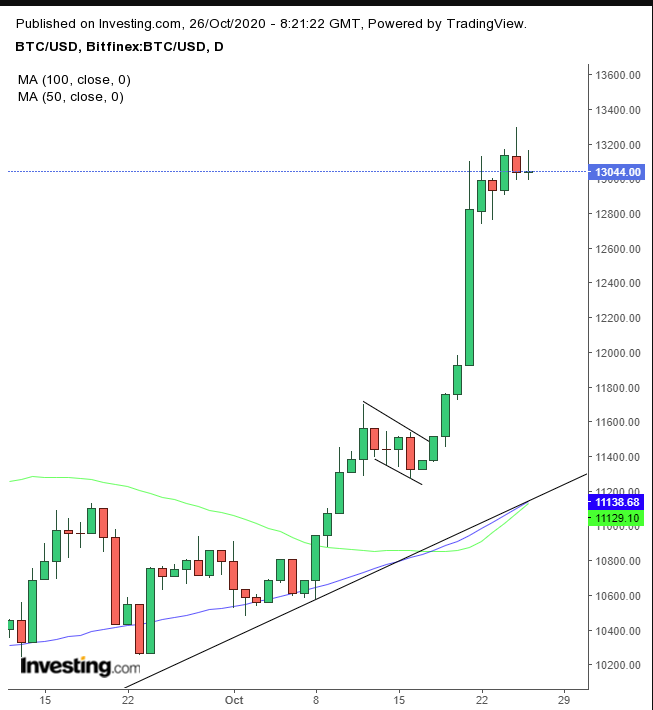 The cryptocurrency is primed for a corrective dip in a return to the uptrend line, before it returns higher.

extended the selloff since falling below $39 per barrel for the first time since Oct. 2 on and the stimulus impasse. 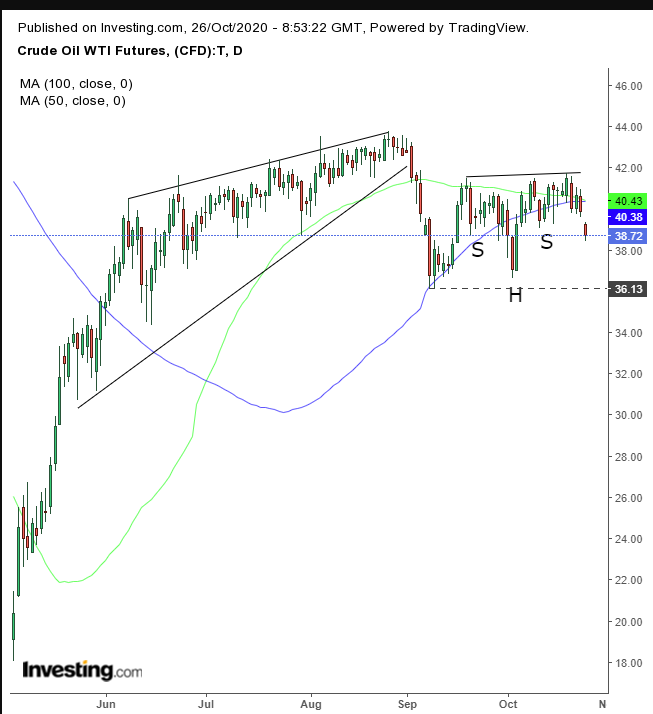 It appears that a potential H&S bottom is not in the works and the price is headed back toward $36, increasing the chances of a downside breakout to follow the bearish rising wedge May 22 to Sept. 1.