Week Ahead: Ukraine-Russia War To Dominate Markets; U.S. CPI Will Also Be In Focus


Russia’s war in Ukraine will almost certainly be the central driving event for markets and market this coming week. But while that geopolitical stressor is expected to heavily impact prices over the short term, the extreme production and supply disruptions the conflict is likely to cause for oil and other energy, metal and agricultural commodities—some of which have vaulted to their highest levels in years—will doubtless have a longer term effect on the economy, both global and domestic.

With the US already facing the highest inflation in over four decades, triggered by COVID lockdowns and restrictions, and the February release this week anticipated to show an escalation during the previous month, the real possibility of an economic recession looms even larger.

Though the Fed and other central banks have argued that inflation is transient, the current conflict in Eastern Europe is threatening to exacerbate the situation while also complicating global trade. However, given the rising number of variables in play, it’s difficult if not impossible to foresee all the potential ripple effects.

Moreover, if the US is headed toward a recession, how effective will the tools with which to avoid another depression available to the Federal Reserve and other world central banks be? After the market crash in 2008 the country dodged a depression because of quantitative easing, but would that solution work again, after global central banks have already created an alternative economy made up of abundant stimulus and zero interest rates?

Investors would do well to remember two points key about QE: (1) it was meant to be temporary, and (2) it nevertheless lasted for years, during which it failed to create economic growth. The same lack of growth occurred after Japan’s QE was launched in 1991.

Still, QE measures did help avoid a recession, at least the first time. But with the Fed having just finished giving it all they’ve got via the most accommodative monetary policy in central bank history, will it work again? There are additional macro catalysts currently in play, lest we not forget that COVID still remains a threat.

Therefore, the Federal Reserve’s upcoming on Mar. 15-16 will garner even more attention, given Fedspeak has already more than hinted at the possibility that could be about to commence.

No surprise then that given the array of jitters roiling markets and the broader global geopolitical environment, stocks sold off on Friday, in volatile trading. As well, three of the four major US averages appear to have topped out already:

The 30-component was the most stable of the major gauges, up just 0.3% during intraday trade before retreating 1.35% to finish the day. 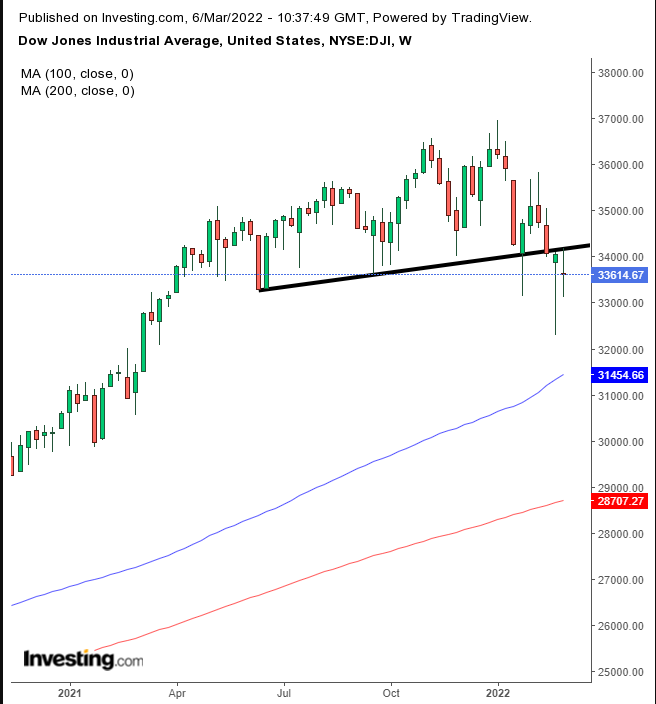 Even when rebounding from a 5% sell-off on Thursday, the price of the mega cap index found resistance right below the top’s neckline. Also, the intraday high failed to penetrate the neckline on Friday, even on an intraday basis. The index closed on Friday at its lowest level since June.

We have frequently pointed out that the Dow is benefiting from its position as the most defensive index in a high-inflation environment, whose listed stocks now provide value, after having been overlooked in favor of high-flying tech stocks during the pandemic. 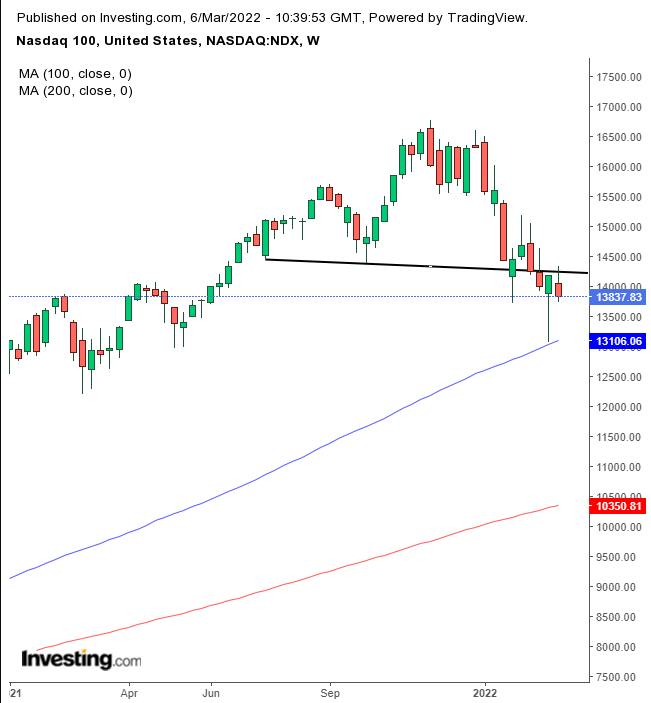 A pattern similar to the Dow’s is visible on the NASDAQ 100. Once the top was complete, the price attempted but failed to return above its neckline.

The small cap dropped by 1.96% after first gaining 1.29% during intraday trade.

The Russell 2000 has already completed a rising flag, bearish after the downside breakout of what appears to be a top.

The only major US bench that has yet to top out is the . It lost 1.3% on Friday, after starting the day up 0.7%. The broad benchmark closed at its lowest weekly level since July. 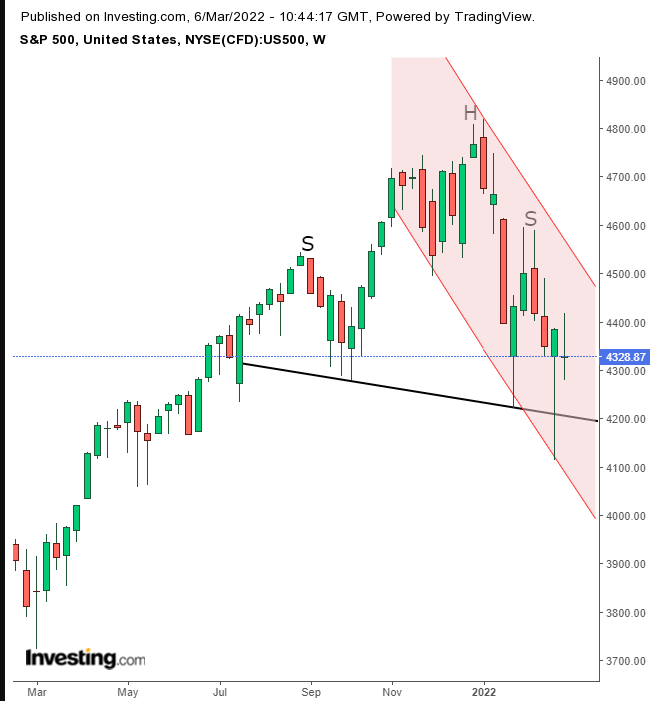 However, the falling channel in which the SPX is trading is heading toward a downside breakout.

If that happens, all four major Wall St. benchmarks will have topped out. That would make a strong argument for the others to follow the Russell 2000 into a bear market, accepted as a 20% decline from its previous peak.

Traders have been pulling capital out of stocks, investing instead in the safety of Treasuries—including into the benchmark note— pressuring yields lower. However, the technicals look like they’ll pose a challenge to Treasury bulls. 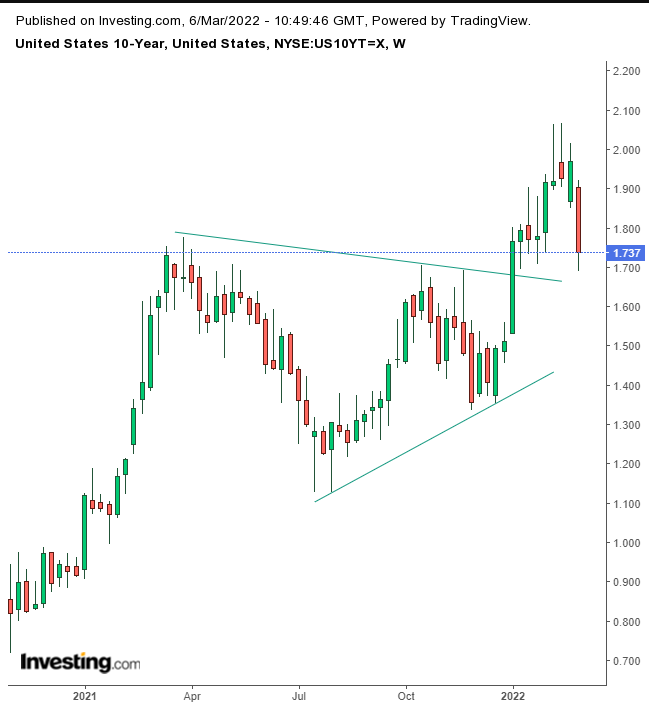 Yields, which possess a negative correlation with Treasuries, found support by the symmetrical triangle, bullish within the underlying uptrend.

Why would investors not buy long-term bonds as a safe haven? Perhaps because being locked into a payout of 1.7% when inflation is spiking could be viewed as a losing proposition; subtracting the rate of inflation from the payout might leave an investor small or even zero gains.

The shot up on Friday, boosted by its safe haven status. 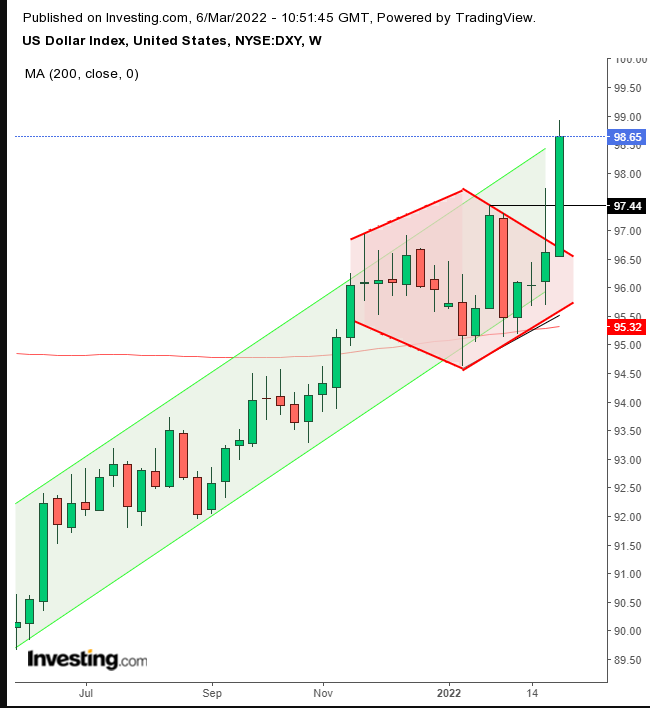 The greenback finally blew out what otherwise could have been a Diamond Top.

rose, even against a strengthening dollar, as investors fled into all available safe havens. 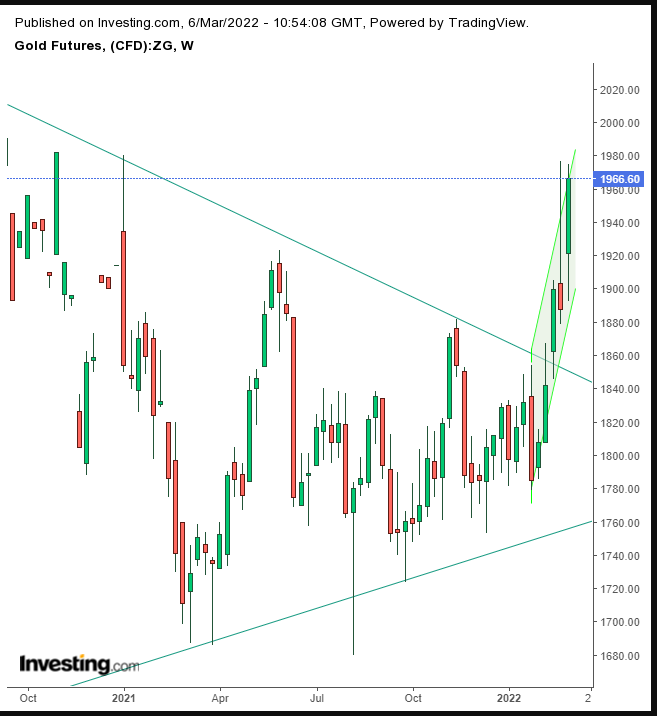 The precious metal is testing the top of a weekly Shooting Star at the top of a rising channel. Even if the yellow metal reverses near-term, we expect it to ultimately keep climbing, having completed an oversized symmetrical triangle.

slumped for the week. 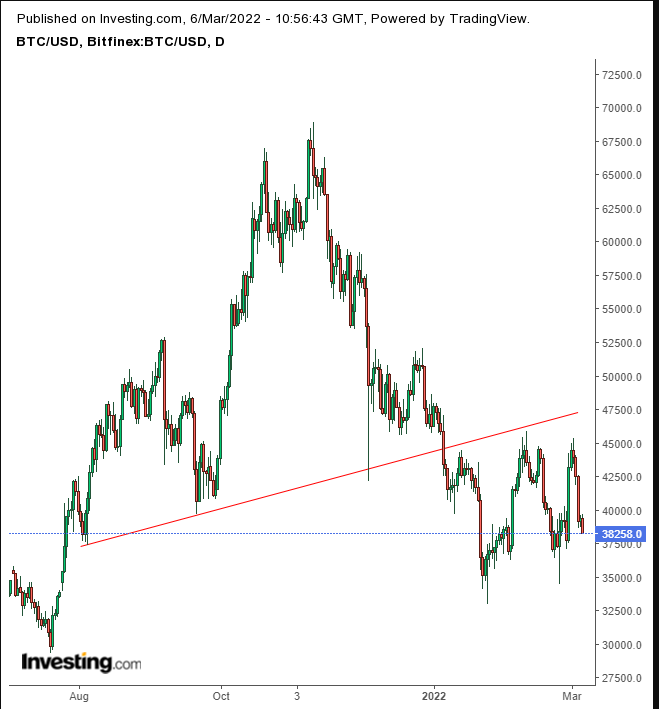 The cryptocurrency has extended a range that’s been in play since the beginning of the year, after completing a large H&S top, whose implied target tests the $30K level. 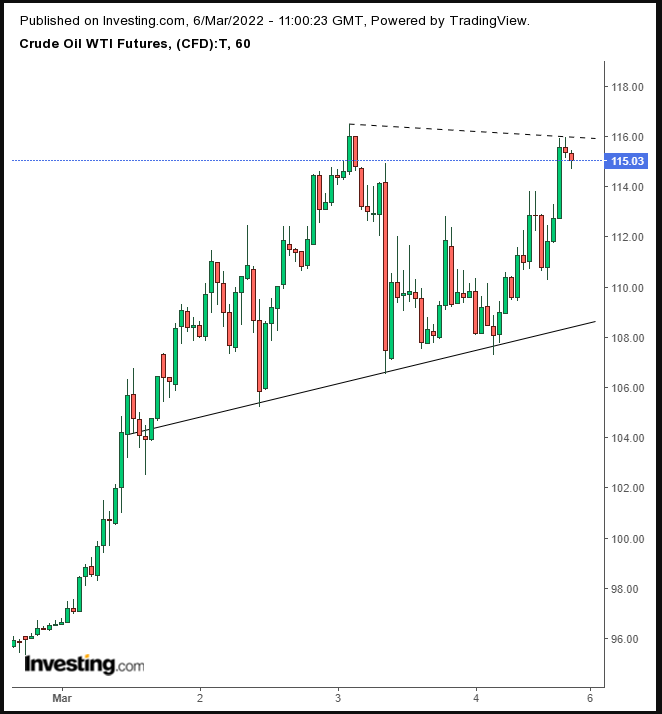 If the price continues to decline, as it has been since Thursday, it may change an H&S top into a symmetrical or ascending triangle, suggesting higher prices yet.