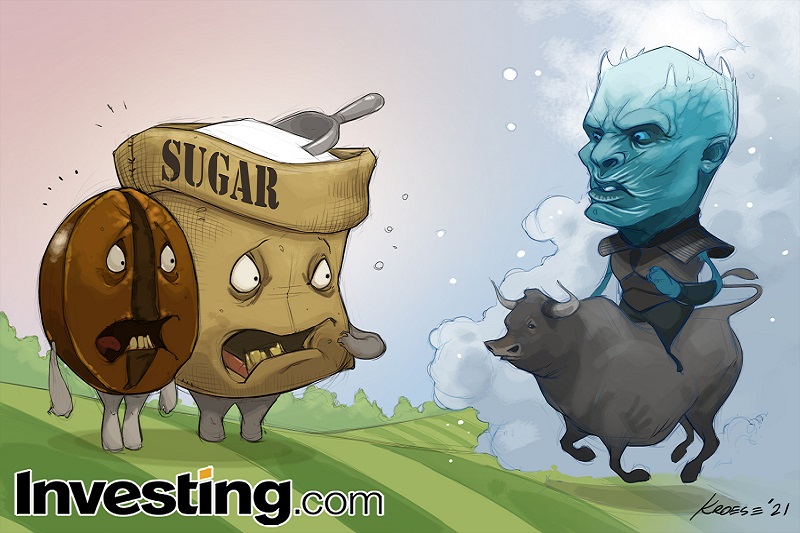 Investing.com — The price of your daily buzz is going up. And it has nothing to do with the pandemic.

Brazil’s south-central region was hit last week by a mass of polar air from Antarctica, which pushed temperatures as far as 6º below zero Celsius and brought snow to a country that is usually remembered for its tropical climate.

The cold felt by Brazilians left soft commodities futures contracts red hot, with , and all soaring. The most affected regions are where these are produced – and this has been the third frost in July alone, a counterpoint to the extreme weather events in the northern hemisphere this summer from the U.S. northwest to Germany and Turkey.

Commodity price fluctuations at this time of the year are not new for traders. July is known as the “weather market”, when Brazil’s winter conditions often upset global prices. Brazil is by far the world’s largest producer of coffee and orange juice concentrate, and the biggest exporter of sugar to the world market.

However, this year’s cold was more intense, especially at dawn on July 20, when Brazilian producers and Chicago traders got wind of it. The impact of the frost on the country’s coffee bushes was the biggest since 1994, according to Reuters. Conab, the Brazilian government food supply agency, estimated that over 10% of next year’s coffee harvest may be affected. This year’s sugar harvest was also revised down by analysts by some 10% to around 520 million tons.

Coffee prices surged to a 7-year high, the contract peaking at $215.20. Even though they have come off those highs since, they’re still around 13% higher than before the frosts. Orange juice futures meanwhile – despite spiking to a two-year high – are already back below their pre-frost level. Sugar futures failed to make a new high for 2021, but remain in an uptrend and have still nearly doubled from their pandemic lows a year ago.

Higher prices don’t reflect any immediate coffee shortage: this year’s harvest has already been brought in. The speculation relates to next year’s harvest, which “keeps the contracts unstable” said Silas Brasileiro, executive president of the National Coffee Council and columnist for Investing.com Brazil. There is still no official projection for total losses, which should be known within a month.

But it is likely that the cold will further depress coffee yields: the 2022 and 2023 harvests were already set to be low, after a severe drought in the country.  The combination of drought and frost is likely to hit trees particularly hard if they have been subjected to the severe ‘recepa’ style of pruning, which is frequently used to stop arabica trees from growing too fast.

The good news is that although sugar and coffee were the fourth and ninth most exported product by Brazil in the first half of 2021, a decline in production and exports is unlikely to have a big impact on gross domestic product, which was $1.4 trillion in 2020. Coffee exports were only $3.5 billion and sugar exports only $2.7 billion. For context, soybean exports brought in $24.8 billion, iron ore $19.8 billion and $14.7 billion.

However, the cold wave may create other problems, notably by adding to domestic inflation. This has already been pushed up by higher fuel and food prices (the latter again due to the drought). Pent-up demand for services after over a year of restrictions is creating further pressure.

A report by XP (NASDAQ:) Investimentos, Brazil’s largest broker, estimated the frosts could add 0.1 percentage point to the country’s official inflation rate, forecast to hit 6.7% by the end of the year, well above the 3.75% level that is the middle of the central bank’s target corridor.

The Brazilian Central Bank has already raised interest rates by 75 basis points on three separate occasions this year. Analysts expect it to raise by another 1 percentage point at its policy meeting on Wednesday, to 5.25%. The BCB’s regular Focus Market Readout, which includes a survey of market expectations, sees the BCB’s key rate at 7% by year-end.