Following last week’s FOMC decision, this week, all eyes are likely to turn to the US report for July. Expectations are for a strong report, something that could come in contrast with Fed Chair Jerome Powell’s at last week’s press conference, and may revive some speculation with regards to an earlier tapering.

Besides the NFPs, we also have two central banks deciding on monetary policy, and those are the and the .

On Monday, the only items on the agenda worth mentioning are the final Markit manufacturing PMIs for July from the , the UK, and the US, as well as the US ISM manufacturing index for the month. As it is usually the case, the final Markit prints are forecast to confirm their preliminary estimates. That said, the ISM index is expected to have risen to from 60.6.

On Tuesday, during the Asian session, the RBA decides on monetary policy. Remember that at the July gathering, policymakers announced that they will proceed with more bond purchases, beyond September, and also said that they are planning to keep interest rates at current levels until 2024.

Since then, the employment report for June revealed that, although the unemployment rate declined to from 5.1%, the economy actually added only 29.1k jobs compared to the 115.2k in May. What’s more, the CPI data for Q2 showed that the headline rate surged to yoy from +1.1% yoy, surpassing the upper bound of the RBA’s target range of 2-3%.

However, the core rate rose only to +0.8% yoy from +0.6%, staying well below the lower end of that range. Therefore, with underlying inflation staying subdued, we doubt that policymakers will have a different view at this meeting. We expect them to stay dovish and repeat that interest rates are likely to stay untouched until 2024. 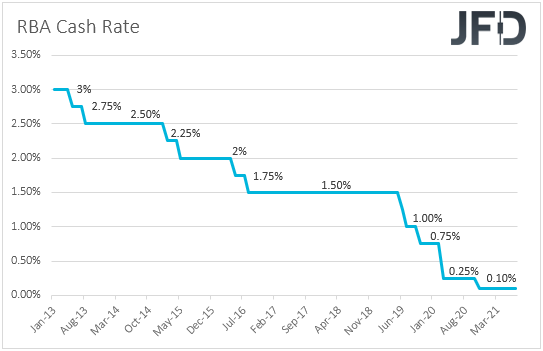 As for the rest of Tuesday’s events, during the Asian morning, besides the RBA decision, we also have Japan’s Tokyo CPIs for July, while later in the day, the US factory orders for June are coming out. With regards to the Tokyo numbers, no forecast is available for the headline rate, while the core one is anticipated to have ticked up to yoy from -0.2%. As for the US factory orders, they are expected to have slowed to mom from +1.7%. 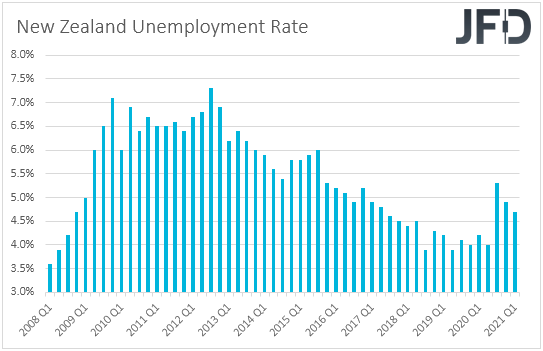 At its latest meeting, the RBNZ kept interest rates unchanged at +0.25%, with the language in the accompanying statement being more hawkish than expected, which raised speculation that this Bank may push the hike button even as soon as this month. So, with that in mind, a strong employment report may increase speculation over a rate-hike at the Bank’s upcoming gathering, and thereby, support the .

Australia’s retail sales for June and Q2 are also coming out. The mom rate for June is forecast to have tumbled to from +0.4%, but the qoq rate for Q2 is anticipated to rebounded to from -0.5%.

Later in the day, we have the final Markit services and composite PMIs for July from the EU, the UK, and the US, the ISM non-manufacturing PMI for the same month, and the ADP employment report for July. The final Markit prints are expected to confirm their preliminary estimates, while the ISM non-manufacturing PMI is anticipated to have inched up to from 60.1.

As for the ADP report, it is expected to show that the private sector has gained jobs, slightly more than June’s 692k. This could raise speculation that the NFPs, due out on Friday, may also exceed somewhat their June print.

On Thursday, the main item on the economic agenda may be the BoE gathering. This is a “Super Thursday,” where apart from the decision, the meeting statement and the , we also get updated economic projections and a press conference by Governor Andrew Bailey. 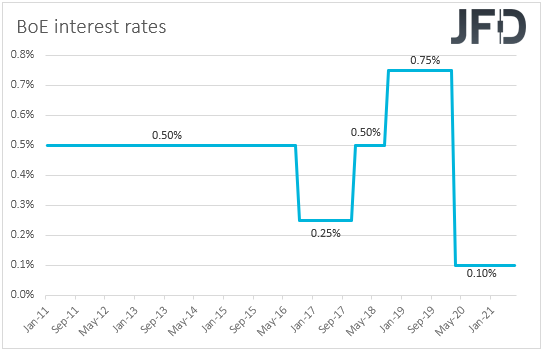 Last time, this Bank decided to keep its policy settings unchanged, with only one member voting in favor of QE tapering. That member was Chief Economist Andy Haldane, for whom that was the last meeting. The Bank repeated that the surge in inflation is expected to be transitory, and added that they do not want to undermine the recovery by premature tightening, disappointing those expecting signals that something like that could be announced soon.

However, since then, a couple of officials expressed the view that tapering should start sooner than previously thought. Thus, it would be interesting to see whether we will have, and if so, how many, votes in favor of tapering. We will also dig into the statement and the minutes for clues as to whether, even those voting against QE tapering, are planning to support such an action at the upcoming gatherings.

With regards to the economic projections, officials could raise their inflation projections but still hold the view that the surge is likely to prove to be transitory. That said, due to concerns over the Delta variant of the coronavirus, the growth outlook remains uncertain. In any case, a more hawkish vibe than previously could support the .

Finally, on Friday, the spotlight is likely to fall on the US employment report for July. Nonfarm payrolls are expected to have accelerated to 900k from 850k, while the unemployment rate is anticipated to have declined to from 5.9%. Average hourly earnings are forecast to have grown mom, the same pace as in June, but this will take the yoy rate up to from +3.6%. 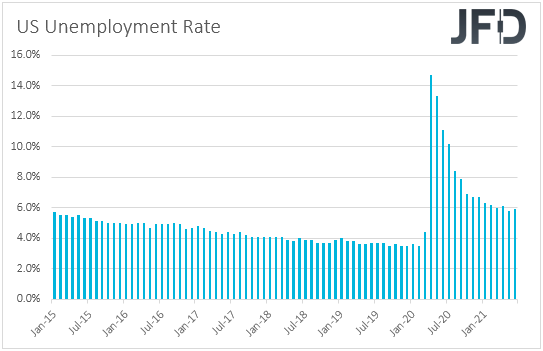 At last week’s gathering, the FOMC kept its policy unchanged, but although officials repeated that they will keep the pace of their QE purchases unchanged until “substantial further progress has been made” towards their goals, they added that the economy has made such progress, and that they will continue to assess the progress in coming meetings.

Having said all that though, at the press conference following the decision, Fed Chief Powell said that the labor market has still a long way to go, and that inflation is still expected to fall back to their longer-run goals. He also added that the timing of taper will depend on incoming data and that they will provide advance notice before any changes, something that may have poured cold water on expectations of an early tightening.

Having said that though, a strong labor report could refute Powell’s remarks and may revive speculation over early tapering. The could rebound on a strong employment report, but equities could pull back, as earlier QE tapering could mean earlier rate hikes as well.

At the same time with the US employment report, we get jobs data for July from Canada as well. The unemployment rate is forecast to have declined to from 7.8%, while the employment change is expected to reveal a slowdown to from 230.7k. That said, a 150k jobs growth still appears decent to us. 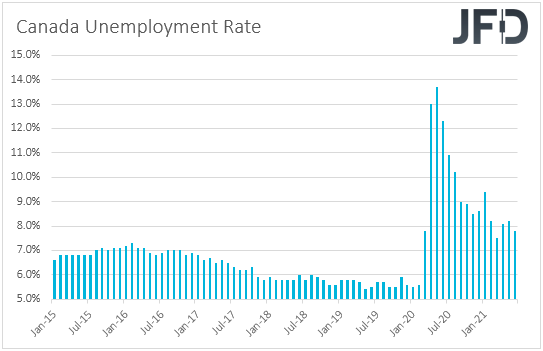 At its prior gathering, the BoC appeared less hawkish than expected, saying that they continue to see the output gap closing in H2 2022, which suggests that their expectations over when they may start raising interest rates have not come forth. What’s more, last week, both and Canadian inflation rates declined, which may have added credence to that view. However, a strong employment report may raise some speculation over a somewhat earlier action by the BoC, and perhaps support the Canadian dollar.