There are no central bank meetings on this week’s agenda, but we do get the minutes from the latest RBA gathering, as well as several data, including the Uk and Canadian CPIs for the month of October. That said, we believe that for another week, investors will stay mostly focused on developments surrounding the coronavirus and a potential vaccine, as well as on headlines surrounding Brexit and any progress (or not) with regards to a draft EU-UK trade accord.

On Monday, during the Asian morning, Japan’s preliminary for Q3 revealed a 5.0% rebound following an 8.2% tumble in Q2. We also got China’s industrial production, fixed asset investment, and retail sales, all for the month of October. rose 6.9% yoy, the same pace as in September, while fixed asset investment accelerated to +1.8% yoy from +0.8%. accelerated as well, to +4.3% yoy from +3.3%.

As for the rest of the day, the agenda appears very light, with the only indicator worth mentioning being the New York Empire State manufacturing PMI for November, which is expected to have risen to 13.50 from 10.50.

On Tuesday, during the Asian morning, the RBA releases the minutes from its latest policy gathering, at which policymakers cut interest rates to 0.10% from 0.25% and decided to extend their government bond buying program by AUD 100bn to buy bonds of 5 to 10 years maturity. Governor noted that a negative policy rate is “extraordinary unlikely”, which means that officials are not willing to cut rates further, and if more is needed, they could boost their bond purchases. With all that in mind, we will scan the minutes to see whether indeed the consensus is for no more rate cuts, and how likely is to get another QE expansion at one of the Bank’s upcoming gatherings.

Later in the day, we get the US retail sales and industrial production, both for October. Both and sales are forecast to have slowed to +0.5% mom and +0.6% mom from +1.9% and +1.5% respectively. With regards to the , it is expected to have rebounded 1.0% mom after sliding 0.6%. That said, we don’t expect the US to react much on economic data this week. We believe that USD-traders will stay focused on headlines surrounding the coronavirus and any further progress with regards to a potential vaccine.

On top of that, they may also pay attention to any updates with regards to President Trump’s legal actions over a fraud with regards to the US elections. Nonetheless, with legal experts saying that Trump stands little chance of altering the election outcome, we are unlikely to see a major change in the markets. As we noted last week, although the covid-era is not behind us, we are a step closer in finding the cure for the virus, which combined with Biden’s victory, is likely to keep risk-linked assets, like equities, supported.

On Wednesday, the UK CPIs for October are due to be released. The rate is expected to have ticked up to +0.6% yoy from +0.5%, while the one is forecast to have held steady at +1.3% yoy. Such prints are unlikely to alter much expectations around the BoE’s monetary policy and thus, pound traders are likely to keep their gaze locked on developments surrounding the Brexit landscape.

At last week’s negotiations, the UK and the EU were unable to narrow down their differences with regards to a potential trade accord and thus, talks are set to continue this week as well. On Thursday, an EU summit begins, which is the new deadline for a draft accord to be agreed. Anything suggesting that this may be the case could prove positive for the British while the opposite may be true if the two sides fail once again to narrow the gap of their differences. 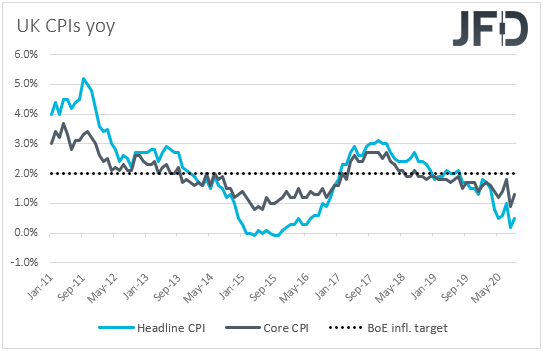 From the Eurozone, we get the final s for October, but as it is always the case, they are expected to confirm their preliminary estimates. We get CPIs for October from Canada as well. The rate is expected to have ticked down to +0.4% yoy from +0.5%, while there is no forecast available for neither the core rate nor the trimmed mean one.

At its latest meeting, the BoC kept interest rates unchanged and scaled back its QE program, noting that the economic outlook has evolved largely as anticipated in the July Monetary Policy Report. Thus, a downtick in headline inflation is unlikely to raise speculation for officials reversing their decision at the upcoming gathering, namely expanding their QE purchases. 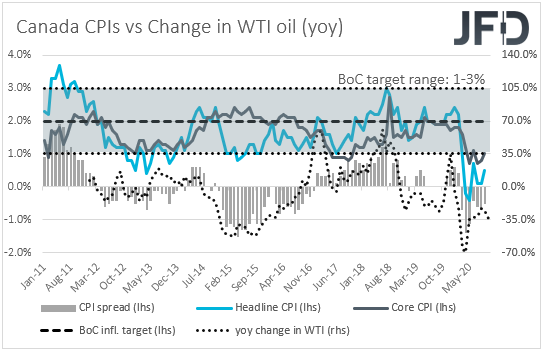 From the US, we have and for October. Both are expected to have increased somewhat from September. On Thursday, during the Asian session, Australia’s employment report for October is scheduled to be released. The is expected to have risen to 7.2% from 6.9%, while the in employment is forecast to show that the economy has lost 30.0k jobs, after losing 29.5k in September.

Although RBA Governor said that cutting rates into the negative territory is unlikely, conditional upon the RBA revealing willingness of expanding QE if deemed necessary, another set of soft Australian data may increase speculation with regards to that, and thereby hurt somewhat the . However, we expect the risk-linked currency to stay mostly driven by developments surrounding the broader market sentiment. As we already noted, we expect investors’ morale to stay supported and thus, we would treat any potential retreat in the Aussie as just a corrective move. 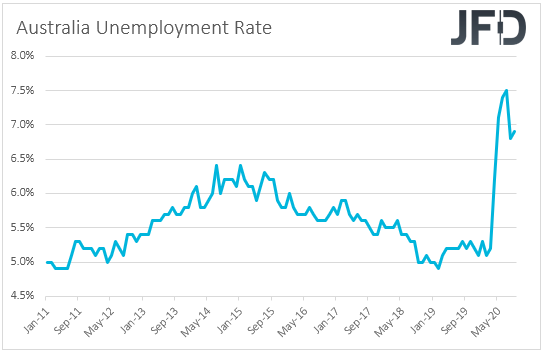