What The Hunt Brothers Can Teach Us About Gamma Squeezes

Almost anything is better than paper money. Any fool can run a printing press.” – Nelson Bunker Hunt

A year ago, the phrase “gamma squeeze” would have caught many of Wall Street’s most astute investors off guard. Today, both traditional and social media regularly parrot the phrase. It won’t be long before the shoeshine kid tells the Bank President about his gamma squeeze exploits.

A Gamma squeeze is just the latest innovation in centuries of market manipulation schemes. Given this activity is a source for significant volatility and instability, it is worth exploring.

Think about his powerful statement for a second. Essentially Chris states that stocks are now a derivative of a derivative of stocks. That is an absurd figment of our imagination.

To provide historical context on market manipulation we look back at an asset squeeze for the ages. In the 1970s, the Hunt brothers, Nelson, Lamar, and William, had extensive holdings in oil, real estate, cattle, and sugar. Concerned about the effects of what they believed to be careless monetary and fiscal policies, as well as risks of the newly formed oil cartel (OPEC), they set out to hedge their businesses and assets. Since it was still illegal for individual investors to own gold, they chose to hedge with physical silver.

The Hunts began buying silver in 1973, acquiring futures contracts equivalent to 55 million ounces of silver. At the time, the price of silver per ounce was $1.50. Over the next six years, the Hunts grew their holdings to well over 200 million ounces, worth more than $4.5 billion.

By 1979, their activity prompted actions by the Commodities Futures Trading Exchange (CFTC) and the Chicago Mercantile Exchange (COMEX). Both entities sought to restrict their buying and forced liquidations. nearly hit $50 per ounce in mid-January 1980 and then fell to $10 per ounce by the end of March. At that point, margin calls on futures contracts and borrowings against existing silver holdings depleted all of Hunt’s cash. They were forced to liquidate silver to cover margin debts. 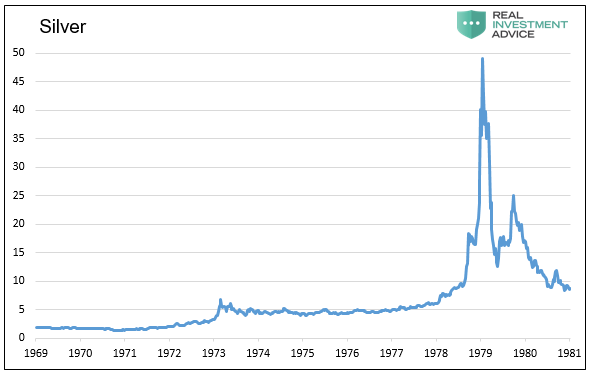 The Hunts initially took physical delivery of silver and did not use leverage. Over time though, they understood the power of using their silver as collateral to buy more silver. Buying silver futures on margin meant they could influence the price at a fraction of the cost. Such leverage allowed them to multiply their purchasing power and drive silver prices higher. The only demand on the Hunt’s was to have enough cash to fund their futures margin account adequately.

In addition to the CFTC and COMEX efforts, the Federal Reserve also played a role in breaking the Hunt brothers. Fed Chairman Paul Volcker sharply raised interest rates in January 1980 from 11.75% to 20.0% making borrowing for the Hunts much more expensive and difficult. One week after the Hunts shut down their silver market activity, Volcker began lowering interest rates.

Leverage allowed the Hunts to distort the price of silver, but it also killed their scheme. They lost over $1.1 billion on the trade. They also lost civil charges, which in part led them to declare bankruptcy.

The Tiffany advertisement below describes the economic effect the Hunt’s had on various industries. 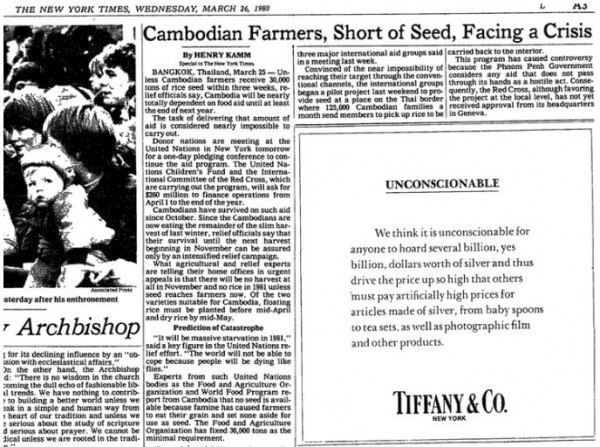 What are Delta and Gamma?

The Hunt brothers used leverage and brute force to corner the silver market. Today’s traders employ a more refined technique but one that relies on leverage.

The “Gamma Whale,” which many think is Soft Bank, provides a lesson on how a gamma squeeze operates. Before explaining the scheme, we define option Delta and Gamma.

Delta quantifies the rate of change of the options price per the change in the underlying stock price. A delta of .50 means the option price will increase 50 cents for every $1 in the stock.

Delta is not a linear function, meaning it will not change proportionately with the stock price. Gamma quantifies how Delta will change per the change in the stock price. The chart below shows the non-linear “S-like” shape of Delta and the Gamma curve that warps it. 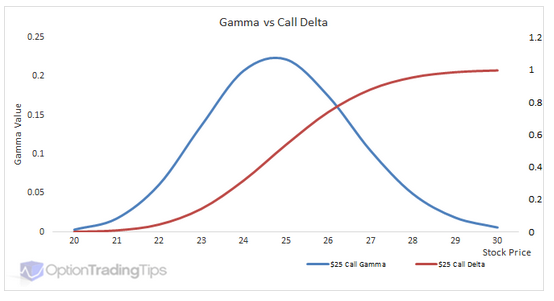 Options trade on leverage of sorts as a relatively small option premium can control many shares. In most cases, the premium is a tiny fraction of the price of the underlying shares. However, if the option is in the money at expiration, the option’s holder takes delivery of the underlying stock and must pay fully for the shares. In most cases, options traders sell the option or roll it to a future month to avoid payment.

The “Gamma Whale” owns a portfolio of stocks. Like all investors, they want the value of their stocks to rise. To better their odds, they buy short-dated call options on stocks they own. Like the Hunts use of silver futures, the Whale can more efficiently manipulate share prices higher using the leverage in the options market.

A Gamma squeeze relies on the hedging actions of options dealers. The banks and brokers who are the largest sellers of options must hedge their trades. Most dynamically hedge, meaning they frequently adjust the hedge amount according to the Delta of the option. If the Delta is .35, then they buy 35 shares for every option contract they are short. If the Delta then rises to .40, they buy five more shares. Conversely, they sell when the Delta falls.

If the Whale buys enough calls, they can trigger a Gamma squeeze. The option purchases force the dealers to buy the stock, which pushes the share price higher. As this happens, the dealers’ buying activity increases the Delta at a non-linear rate (gamma). In circular fashion dealers then must buy more of the stock, and on and on.

Like Hunt’s strategy, this one works as long as you can keep buying calls, and the stock price keeps rising. As the Hunt’s found out, that is not always possible. Here are a few problems the Whale and others face.

Hunt’s scheme failed because they relied on leverage. The Gamma squeeze also depends on leverage and the willingness of important market participants. If the cost of leverage goes up or the intermediaries in the trade become reluctant, then the music of the gamma trade will stop.

Equity prices and valuations have lost all relationship to economic reality. Gamma induced surges are yet another example of the false market foundation. Ignoring the inherent risks may be pleasant when the market rises, but at the same time, instability soars. We urge you to look back at the silver chart to indicate what may happen when reality remerges.

Facebook
Twitter
Pinterest
WhatsApp
Previous articleChart Of The Day: Yen On The Brink Of Bullish Breakout
Next articleThis social media platform gives you the option to make your posts undeletable