What’s Behind The Sell-The-News Scenario In This Infrastructure Stock?

What happened to all of the excitement about the passage of the infrastructure bill? After all, $2 trillion in new, prospective federal spending on public works projects used to get investor’s juices flowing back in the old days.

Maybe $1 trillion is considered chump change, too small to make a dent in the decaying infrastructure across America?

The bill includes about $110 billion in new spending for roads and bridges, $73 billion of power grid upgrades, $66 billion for rail and Amtrak, and $65 billion for broadband expansion. It also provides $55 billion for clean drinking water and $39 billion for transit.

Maybe the cyclical companies that will be deriving benefit from the funds already have seen their gains?

Or, maybe the market is a bit defensive because the bill is 2702 pages of spending plans that few have examined (not an accident). The major provisions have been hyped, but 2702 pages leaves considerable room for some serious pork and probably some other “partisan goodies” that will raise objections.

Be that as it may, Senate Majority Leader Schumer is making sure that the majority of the 2702 pages remain a mystery before the Senate votes right before the Chamber goes on summer recess.

“Shovel ready” certainly is not stimulating stocks or backing-up yield like logic would suggest.

No worries. Just another market distortion that the Fed will paper over.

Back in the real world, let’s take a look at a company that stands to benefit from the infrastructure deal, Granite Construction Incorporated (NYSE:).

Granite, which describes itself as “America’s Infrastructure Company,” is one of the largest diversified construction and construction materials companies in the United States as well as a full-suite provider in the transportation, water infrastructure and mineral exploration markets.

Technically, let’s notice that GVA has climbed from 8.90 in March 2020 to 44.31 on 6/25/21, a gain of nearly 400%. Since the June 2021 high, however, GVA has been spinning its wheels just when Congress started to get serious about an infrastructure deal that both sides of the isle could embrace.

In fact, Monday—the day that Chuck Schumer said a bipartisan vote is very nearly a done deal—GVA reversed a failed rally into a Bearish Engulfing Candle!  What is that all about?

If the Bearish Engulfing Candle remains intact into the close, then GVA’s reaction to some splendid news certainly seems odd, and certainly does not imbue the impact of the infrastructure companies with a high degree of confidence near term.

Just maybe we are seeing the “sell-the-news” scenario unfolding in an infrastructure name that is up 400% in 18 months?

Could GVA and yields be sending the same message? 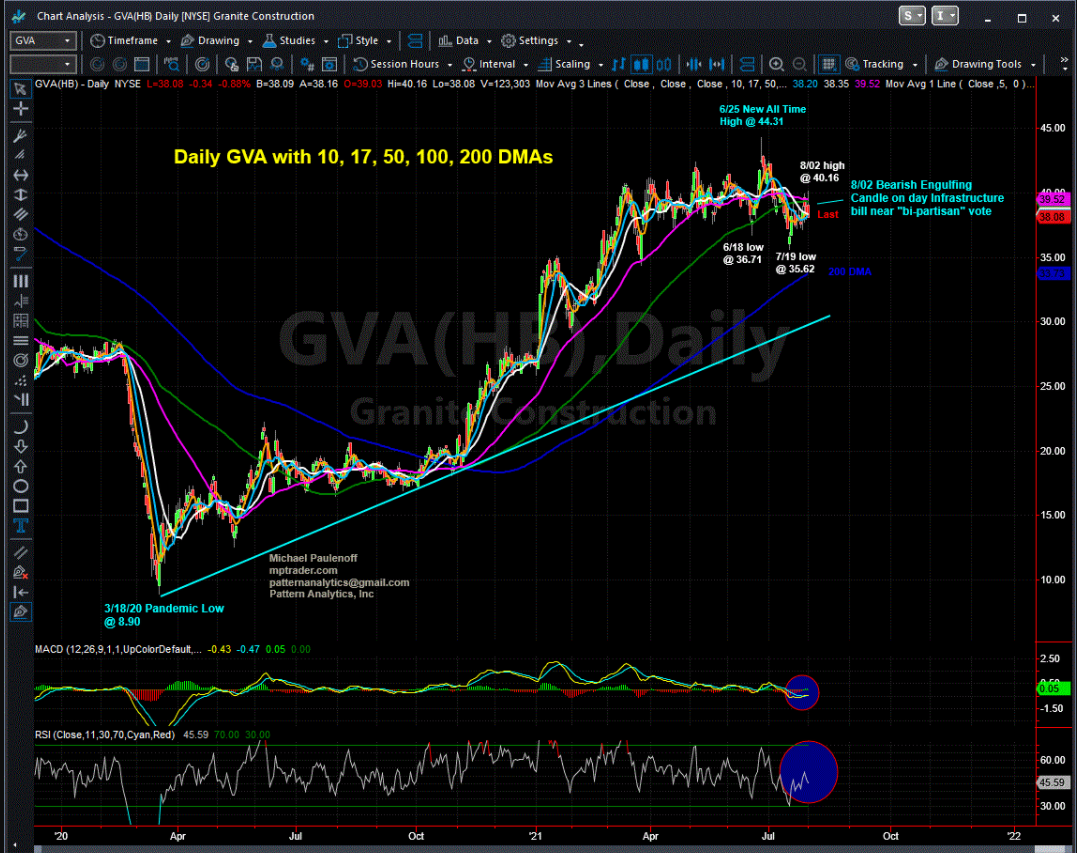