What’s Likely Next From Stocks And The Dollar?


It’s evident that stocks have once again invalidated the breakout above their early-2020 high. They have also closed the week below the lowest weekly September close. Back in September, the index reversed on a weekly basis and rallied once again. This is similar to what happened in 2018 (August) when stocks first broke to new highs. Back then, the was lower, and therefore it’s no wonder that the breakout held and this time (in September) it was temporarily invalidated. 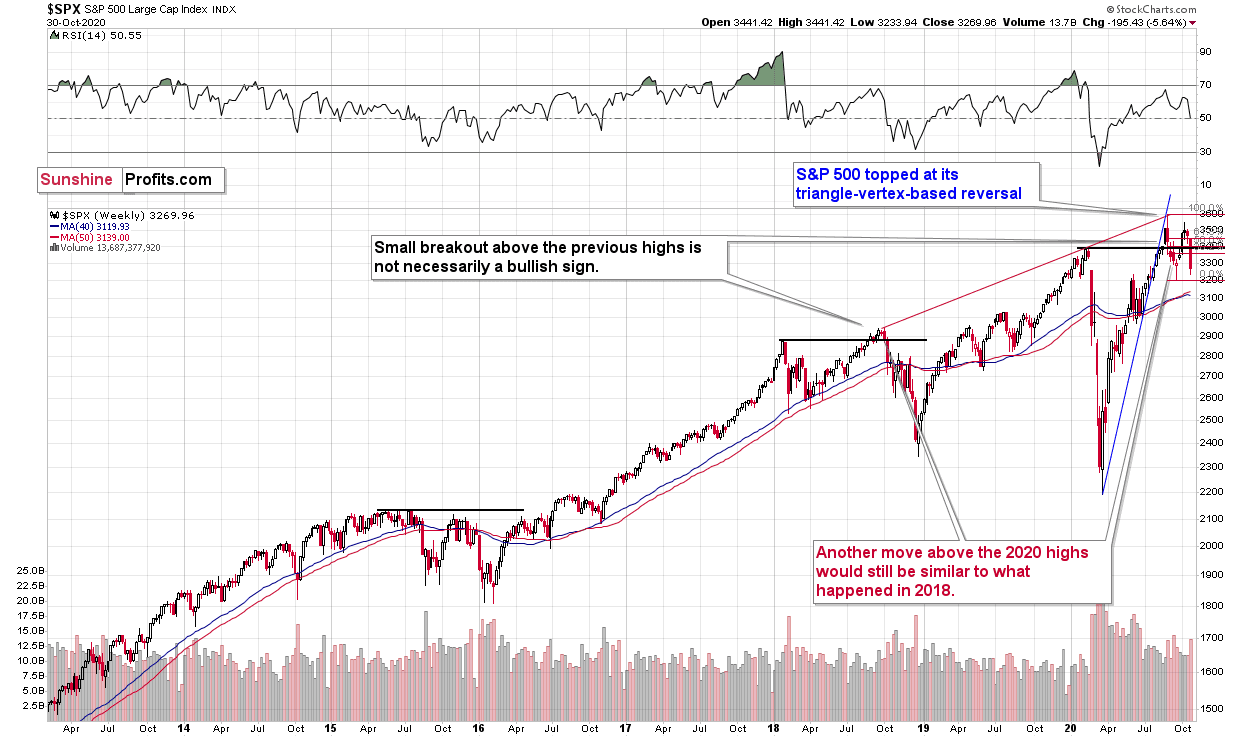 Back in 2018, stocks moved to a new high (not significantly higher), and this time they didn’t manage to do so, but were quite close (the rally seems to have burned itself out in August).

The key takeaway from this similarity is that once stocks slide below the September lows in intraday terms, they are likely to decline further. Perhaps much lower.

Back in 2018, stocks consolidated around the previous lows, and then they declined even more profoundly in the final part of the year. Could the same happen this time as well? Well, it could happen, but with so much money being injected into the system from various directions, we don’t want to say that it’s inevitable.

What is very likely in my view, however, is that stocks will slide, and when they do, they will take the precious metals sector with it. Especially silver, and mining stocks.

Moreover, let’s keep in mind that the situation continues to be excessive on the forex market. 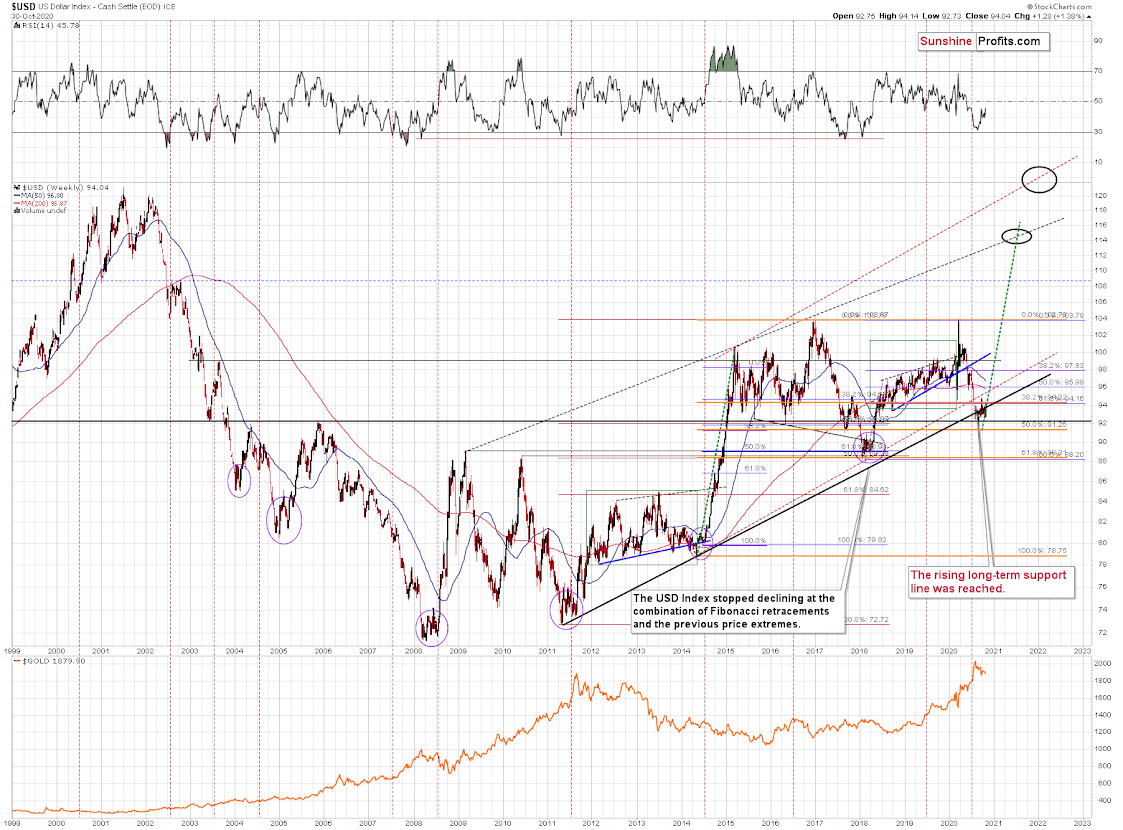 Remember when in early 2018 we wrote that the Index was bottoming due to a very powerful combination of support levels? Practically nobody wanted to read that as everyone “knew” that the USD Index is going to fall below 80. We were notified that people were hating on us in some blog comments for disclosing our opinion – that the USD Index was bottoming, and gold was topping. People were very unhappy with us writing that day after day, even though the USD Index refused to soar, and gold was not declining.

The USD Index was at a powerful combination of support levels. One of them is the rising, long-term, black support line based on the 2011 and 2014 bottoms. The other major support level and a long-term factor is the proximity to the 92 level – that’s when gold topped in 2004, 2005, and where it – approximately – bottomed in 2015, and 2016.

The USDX just moved to these profound support levels, broke slightly below them, and now it has clearly invalidated this breakdown. For many weeks, we’ve been warning about the likely USD Index rally, and we finally saw it.

The USD Index moved briefly below the long-term, black support line and then it invalidated this breakdown before the end of the week. This is a very bullish indication for the next few weeks.

Before moving to the short-term chart, please note that the major bottoms in the USD Index that formed in the middle of the previous years often took the form of broad bottoms.

Consequently, the current back and forth trading is not that surprising. This includes the 2008, 2011, and 2018 bottoms.

A crucial aspect is that the rally that we’ve witnessed so far is just the tip of the bullish iceberg. The breakdown below the key support levels was invalidated, which is a strong bullish indicator. Since it happened on a long-term chart and the temporarily broken lines were critical, the implications are incredibly important as well– and they should be visible from the long-term perspective.

So, how high could the USD Index rally now be? At least to the 100 level (approximately). This way, the upcoming rally would almost match the rally that started after the previous major invalidation – the 2018 one.

Still, we wouldn’t rule out a scenario in which the USD Index rallies above its 2020 highs before another major top. After all, the USD Index is after a very long-term breakout that was already verified several times.

There isn’t a market that moves on its own in today’s globalized world economy. Most recently, has been correlated negatively with the USD Index and positively with the stock market. Right now, the implications of the general stock market and the USDX movements remain bearish for the next several weeks. However, precious metals could move higher in the next few hours or days.

All essays, research and information found above represent analyses and opinions of Przemyslaw Radomski, CFA and Sunshine Profits’ associates only. As such, it may prove wrong and be subject to change without notice. Opinions and analyses are based on data available to authors of respective essays at the time of writing. Although the information provided above is based on careful research and sources that are deemed to be accurate, Przemyslaw Radomski, CFA and his associates do not guarantee the accuracy or thoroughness of the data or information reported. The opinions published above are neither an offer nor a recommendation to purchase or sell any securities. Mr. Radomski is not a Registered Securities Advisor. By reading Przemyslaw Radomski’s, CFA reports you fully agree that he will not be held responsible or liable for any decisions you make regarding any information provided in these reports. Investing, trading and speculation in any financial markets may involve high risk of loss. Przemyslaw Radomski, CFA, Sunshine Profits’ employees and affiliates as well as members of their families may have a short or long position in any securities, including those mentioned in any of the reports or essays, and may make additional purchases and/or sales of those securities without no