Wheat prices have hit record highs on intensifying concerns of a supply shortage because of the war in Ukraine, raising the spectre of soaring global food inflation.

Wheat traded in Chicago, the international benchmark, has jumped more than 50 per cent since Russia invaded Ukraine. Prices rose to as high as $13.40 a bushel on Friday, while European milling wheat in Paris hit a record of €406 per tonne.

Food and agricultural experts have warned of increasing food insecurity in poorer countries, many of which are already suffering from high hunger levels because of the coronavirus pandemic. Food inflation is also expected to rise. In January, average food inflation around the world hit 7.8 per cent, the highest level in seven years, according to the IMF.

The big price increases were already curtailing the ability of grain-importing countries to purchase wheat. Turkey, a leading buyer of Russian wheat, was forced to reduce its volumes for an international tender from its original targets.

Demand was also shifting to alternative grains, said Commerzbank, leading to a significant rise in corn over the past few days. Corn traded in Chicago has risen almost 10 per cent since the Russian invasion.

Russia’s war in Ukraine had disrupted global grain and energy markets, which would push up food prices with poorer food-importing countries experiencing the most serious consequences, said Caitlin Welsh at US think-tank Center for Strategic and International Studies.

“Russia’s war on Ukraine has the potential to exacerbate food insecurity around the world,” she said. 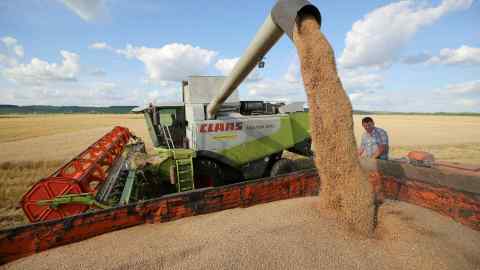 Grain exports have been halted by a lack of transportation because of port closures, while paying Russia has become more complex due to sanctions imposed by the west. Leading agricultural traders, including Archer Daniels Midland and Bunge, which buy and sell grains around the world, have closed their operations in Ukraine.

Analysts and traders are concerned about the planting of this year’s spring crop, including wheat, corn and barley. The winter wheat planted during the European autumn may not be harvested in the summer.

In addition to grain prices, farmers around the world are likely to feel the impact of rising costs as Russia and Belarus are the leading fertiliser producers. The Russian Industry and Trade Ministry recommended that fertiliser producers temporarily halt exports, according to Interfax. “Both potash and phosphate are still some way off the record prices hit in 2008, but that record may well be tested over the coming weeks,” said Chris Lawson, head of fertilisers at consultancy CRU.

Brazil’s agriculture minister Tereza Cristina said this week the country, which is the fourth-largest consumer of fertilisers, had sufficient stocks until the start of the next harvest in October. She plans to visit Canada this month in order to negotiate more potash supplies. The South American nation imports around 80 per cent of its fertilisers. Russia is the biggest source, providing around one-quarter.

The Trade Secrets Newsletter is the FT’s must-read email on the changing face of international trade and globalisation. Written by FT trade specialist Alan Beattie, it is delivered to your inbox every Monday. Sign up here

Facebook
Twitter
Pinterest
WhatsApp
Previous articleCompanies struggle to extract staff from Ukraine and Russia
Next articlePurvanchal: The real test for allies of both BJP and SP in UP polls