PMI survey data for October indicate that the Eurozone economy’s recovery is slipping into a new phase of contraction, due to a rebound in coronavirus infections and related blowback on business and consumer activity. The US economy appears more durable so far, although America is reporting a new rise in Covid-19 infections, which suggests that economic headwinds may rise in the third quarter.

For Europe, the die may already be cast, based on the October flash estimate of survey data. This proxy for GDP shows that the currency bloc’s economy slipped into contraction this month after a brief rebound from the initial phase of the coronavirus recession.

“Business activity fell back into decline across the Eurozone in October as accelerating growth of manufacturing output was overwhelmed by a steepening deterioration in the service sector amid rising Covid-19 worries. Germany was the only bright spot, as France and the rest of the region as a whole fell deeper into decline.” 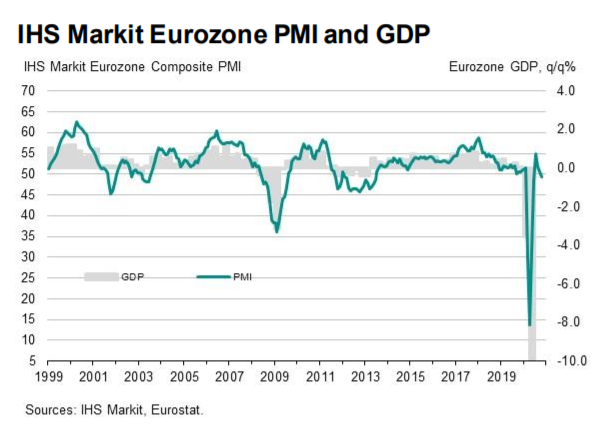 “The eurozone is at increased risk of falling into a double-dip downturn as a second wave of virus infections led to a renewed fall in business activity in October,” says Chris Williamson, chief business economist at IHS Markit.

Europe has been reporting a rebound in coronavirus cases in recent weeks. Notably, Germany for the first time this week reported that new daily cases rose above 10,000. Meanwhile, France announced that it was expanding its coronavirus curfew to more than two thirds of the population. Reuters reports that:

“hospitals across Europe remain under strain. Even though it remains well below levels at the peak of the crisis six months ago in the region, COVID-19 hospital admissions and occupancy are going up again.”

Are Europe’s latest coronavirus-related troubles a preview for the US in the weeks and months ahead? Unclear, but recent data shows that America is now battling a third wave of coronavirus infections. New reported daily cases this week rose above 70,000 for the first time in three months, based on a seven-day average. 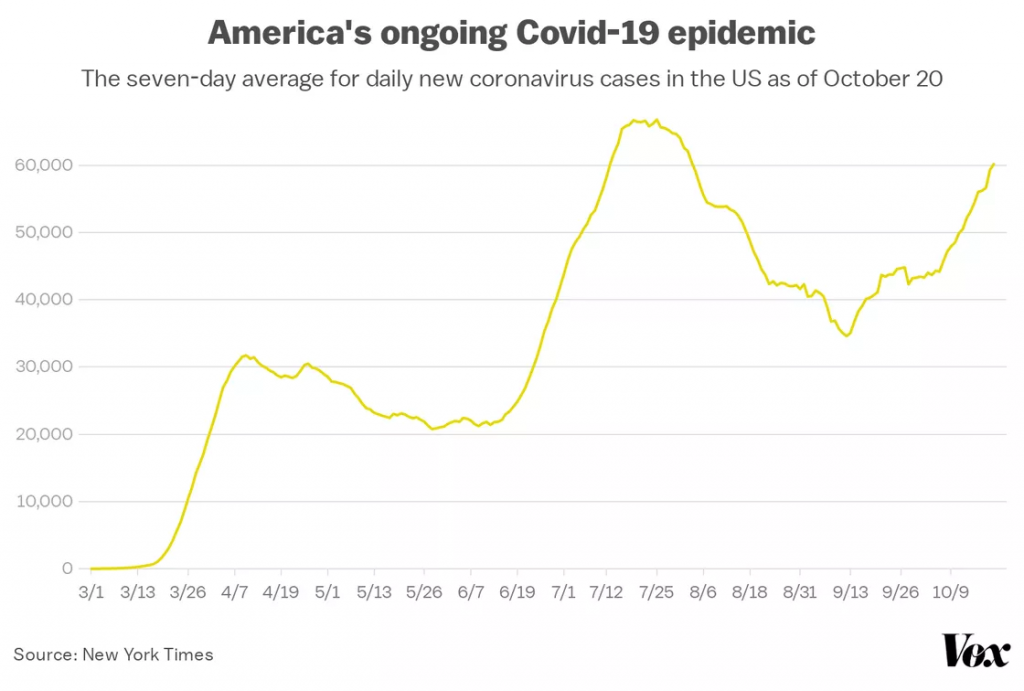 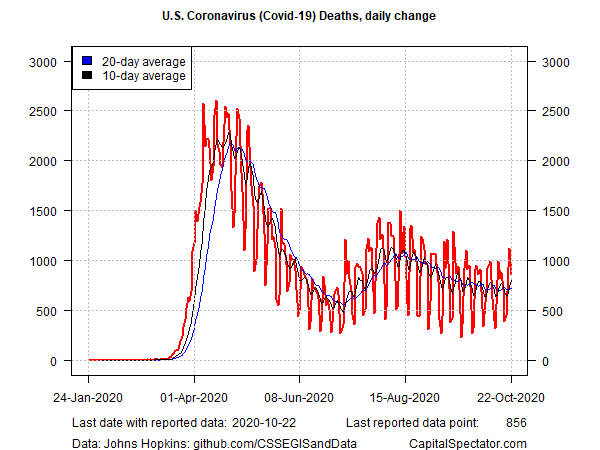 Meanwhile, US coronavirus hospitalizations are rising in 39 states and at or near a record in almost half of the states, according to analysis by Axios.

“No state is anywhere near the worst-case situation of not having enough capacity to handle its COVID-19 outbreak. But rising hospitalization rates are a sign that things are getting worse, at a dangerous time, and a reminder that this virus can do serious harm.”

The good news is that the US economy appears to be holding on to a rebound. Next week’s initial estimate of third quarter is on track to report a strong bounce after the Q2 collapse in output. Among the most optimistic nowcasts: the Atlanta Fed’s GDPNow model, which is currently projecting a 35.3% annualized increase for Q3 (as of Oct 20). Other estimates are milder, including the New York’s Fed’s nowcast for a 13.8% rise (Oct. 16).

The common theme for the US government’s preliminary Q3 GDP report, scheduled for Oct. 29: a solid and perhaps record gain is expected. But Europe’s recent experience suggests that the Q3 bounce in the US may be challenged in the final months of 2020.

“The Covid-19 pandemic is intensifying, rancor over the US presidential election is mounting, and lawmakers haven’t come to terms on another fiscal rescue package to shore up the fragile economy,” warns Mark Zandi, chief economist of Moody’s Analytics. “It is difficult to see how the economy will be able to gain any traction until next year when the pandemic and election are hopefully in the history books.”

Reviewing recent data paints a mixed picture for the US. On the plus side, housing is strong. Home builder sentiment rose to a record high this month, according to the Housing Market Index. Meanwhile, sales of existing homes surged to a record in September.

The US labor market is still expanding, but the recovery from the deep losses in March and April is slowing. “The issue is momentum, and I think we’re losing it,” said Drew Matus, chief market strategist for MetLIfe Investment Management, after the release of the September report on payrolls.

“When you go through a significant disruption to the labor market, it takes time to fix itself. That’s without regard to whether there’s a virus.”

A leading indicator for the US economy and the labor market is showing signs of healing, but the drop in new jobless claims last week to 787,000–a new pandemic low—is still unusually high relative to history. 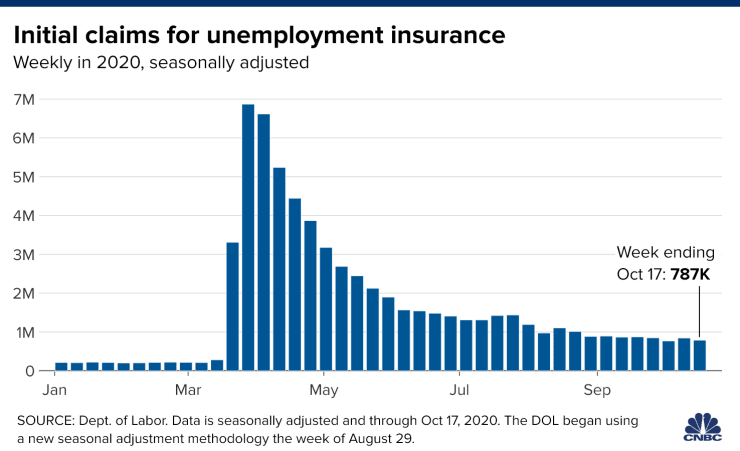 “We’re happy to see continuing claims fall, but the decline—even allowing for the PEUC/extended benefits effect — does not map one-to-one onto rising payrolls,” notes Ian Shepherdson, chief economist at Pantheon Macroeconomics. “Some people no longer claiming benefits may have dropped out of the labor force, while some might have taken non-payroll gig or freelance jobs. Moreover, continuing claims lag initial claims, so if initial claims start rising again, continuing claims will follow.”

The bottom line: the weeks ahead will be critical for determining if the US can avoid Europe’s double-dip risk. Arguably the main factor in the immediate future is fiscal stimulus, or the lack thereof.

“We know we need the stimulus, we know it needs to be large. If, and when, we’re going to get it is very uncertain, and that’s one thing that’s slowing down the US economy,” says Nouriel Roubini, professor of Economics at New York University and Chairman of Roubini Macro Associates.