Will Value Stocks Overtake Growth Shares After The Election?


Citigroup analysts say the probability is rising for a recovery in the value risk factor, which has trailed the equivalent for growth stocks in recent years. It’s anyone’s guess if they’re right. The market gods are consistently shy about revealing such insights in advance. Perhaps, then, it’s no surprise that many forecasts in recent years have argued that value is on the cusp of a rebound only to see the relentless dominance in growth persist. But maybe it’s different this time.

“Value always performed pretty well in the six months after the election,” advises Alexander Altmann, Citi’s head of US equity trading strategy. His favorable outlook for value is no sudden decision – he says he’s been partial to stocks in the value camp since May. “The magnitude of that performance did however vary depending on what kind of election outcome we got,” he explains via Bloomberg.

The rationale: a change in administrations that unleashes major policy adjustments can trigger a regime shift in markets. Assuming Joe Biden takes the White House and Democrats lead both chambers of Congress, “we should see a significant amount of rotation in the market,” he notes.

MarketWatch columnist Michael Brush agrees. “Value investing, which has been maligned for years, is about to come back in style,” he predicts, arguing that history suggests no less. “Elections have a long track record of doing wonders for value stocks, whose prices are deemed low compared with business prospects.” Citing research from the Bear Traps Report, he reports that value beat growth for six months following every presidential election since 1980.

Will history repeat? Maybe, but no one will confuse this post-1980 record as a statistically robust probability bias. Nonetheless, it’s an intriguing narrative and it inspires taking stock of where we stand in the value-growth horse race.

Let’s parse recent history with three sets of ETF proxies for large-cap, mid-cap and small-cap comparisons. In the first chart, the divergence is stark in favor of growth for the past five years. The iShares S&P 500 Growth ETF (NYSE:) has surged 131% over that span, far above the relatively modest 50% rise for iShares S&P 500 Value ETF (NYSE:). 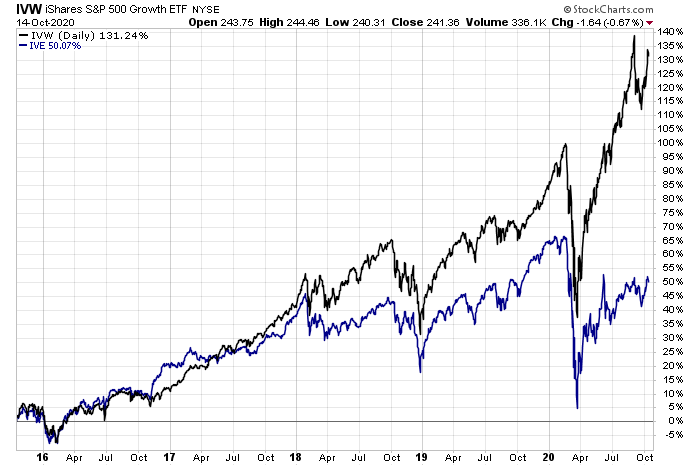 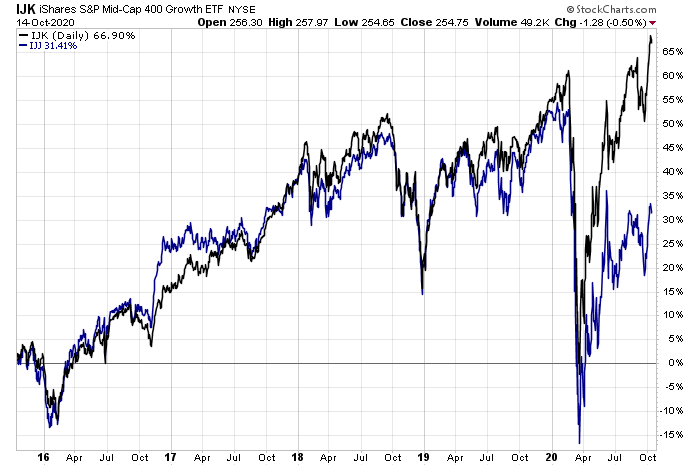 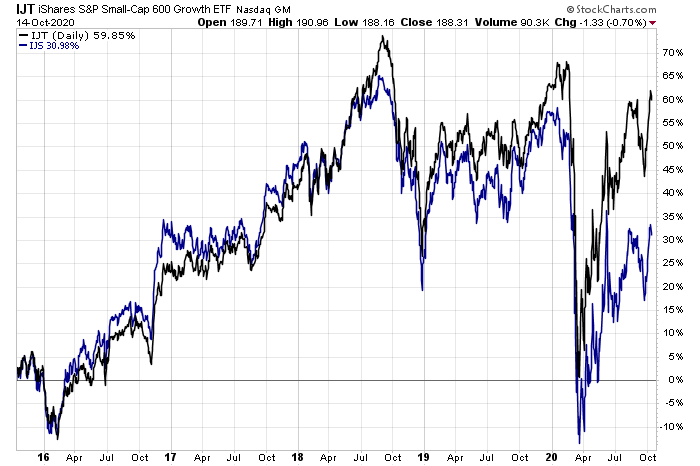 How should we use this history? For investors with light or non-existent value exposure it may be a timely moment to rebalance the portfolio. But there are no guarantees that value will shine. The future remains as murky as ever, but if you’re inclined toward the value factor the market gods may finally be willing to reward this slice of equities.