With S&P 500 Volatility Off The Charts, Investors Should. . .


The shed nearly 6% over the last five sessions in the worst weekly loss since this spring’s Coronavirus collapse. 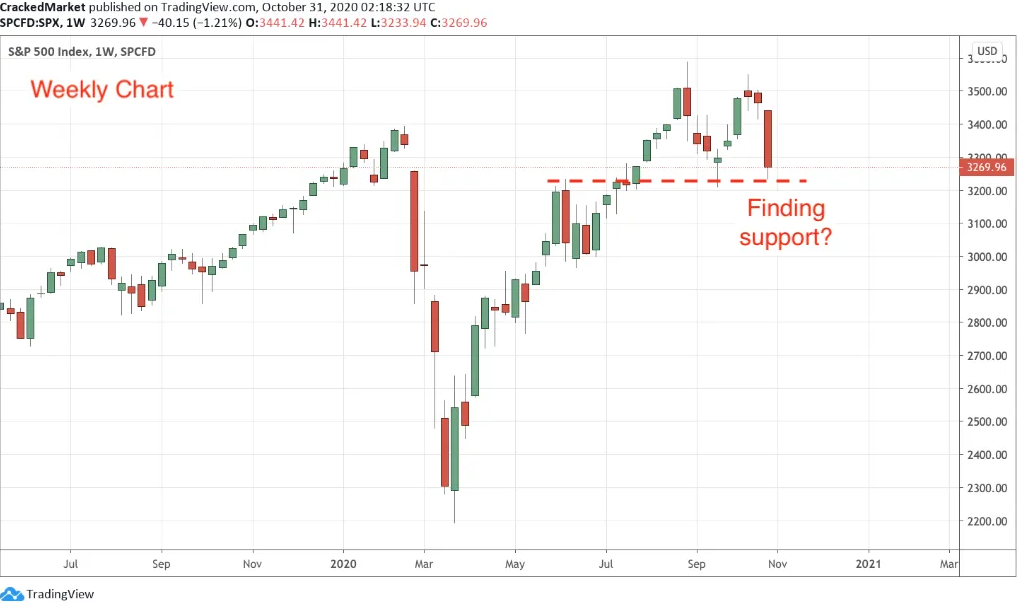 A recent spike in COVID infection rates and the looming presidential election created a risk cocktail many equity owners could no longer tolerate. The selling kicked off Monday with a 2% tumble and it peaked Wednesday following another 3.5% collapse. To put a bow on all of it, we finished near the weekly lows.

Sell first, ask questions later became many people’s trading plan and they were offering steep discounts to get out at any price. But as bad as all of this seems, the selling largely climaxed Wednesday and the last two sessions were testing but not exceeding the weekly lows in a meaningful way.

Nervous owners often place stop-losses under recent lows and crossing those widely followed levels triggers waves of autopilot selling. We saw that phenomenon at work on Monday and Wednesday in those multi-percent tumbles. But Thursday and Friday turned out differently. Both days undercut the prior lows but that violation did not trigger another cascading wave of defensive selling. That absence of auto-pilot selling suggests we are finally running out of nervous owners. At least for the time being.

As is always the case, few things shatter confidence like screens filled with red. While we might have exhausted this week’s supply of nervous sellers, tumbling next week on a hung election or spreading lockdowns could create an entirely new category of nervous sellers. That said, we got rid of a lot of nervous sellers this week and to trigger that next leg lower we need something new. If next week turns out to be more of the same, or even better, “less bad than feared”, the lows are already behind us.

For the more nimble-minded trader, expect this volatility to persist for a while. Remember, volatility means large swings in both directions. Set a tripwire on either side of Monday’s open and ride the next wave higher or lower, take profits in the afternoon and do it again Tuesday, Wednesday, and Thursday.

Most likely, prices will bounce Monday morning after nothing bad happens this weekend. Buy that bounce and ride it higher through the day. But remember, is off the charts and that means every bit of up is followed by a bit of down. Take profits Monday afternoon and get ready to throw the tripwires out again Tuesday morning.

On the other hand, if the COVID situation gets worse this weekend and prices slump Monday morning, short that weakness and ride that wave of selling lower. But just like above, take profits Monday afternoon and be ready to set tripwires again Tuesday morning.

This is a volatile market and no matter which way it goes, expect these intraday moves to be fast and one-way. That makes this the perfect environment for directional day trading. Jump on the early move and take profits later that day. Avoid holding large positions overnight because one day’s up turns into the next day’s down.