In our assessment of popular bond funds, we looked at a group of bond funds that often make shortlists for advisors –, , , , , , and . We started with five-year returns and Sharpe Ratios. That’s not a comprehensive analysis, but it’s where we began. Here’s what we found out. 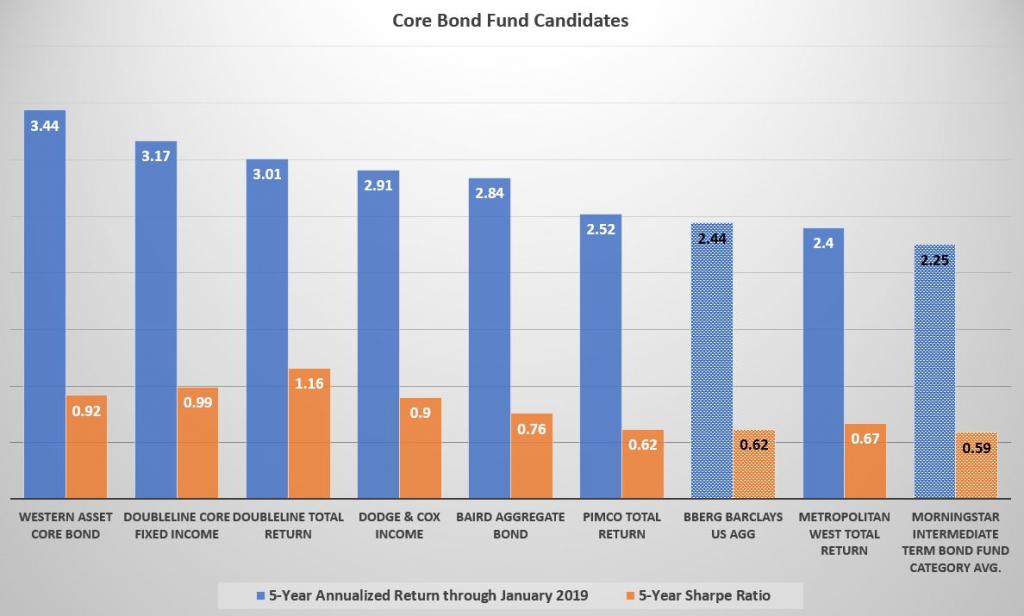 DoubleLine Total Return’s 3.10% annualized return was the second best over the five years through January 2019, but that fund also had the best Sharpe Ratio of 1.16%. That means the fund delivered the best return per unit of volatility among this group of “usual suspects” on most advisors’ short lists. Lots of people think of the fund’s manager, Jeffrey Gundlach, as a gunslinger, who takes a lot of risks. That may be because of his outspoken and frank webcasts, which many investors, including the group here at RIA Advisors, find informative. But the truth is Gundlach runs risk-averse funds. When he’s done something unusual, such as his buying Alt-A mortgage-backed securities for the Total Return fund after the financial crisis, it’s been justified.

Alt-A’s probably delivered a ton of return in the first few years the fund owned them, so the fund’s gaudy post-crisis returns (more than 9% in each of the calendar years 2011 and 2012) might be a thing of the past. But that doesn’t mean the fund is any less attractive or that it can’t continue to beat most of its peers and the Bloomberg Barclays (LON:) U.S. Aggregate (NYSE:)

Western Asset has the best five-year annualized return at 3.44%. But its Sharpe Ratio of 0.92% shows that investors have to tolerate some volatility to achieve those returns. We also looked at how the funds – or the funds their current managers ran – did in 2008, and Western Asset had a difficult time in that stressful period. The firm went out on a limb at the wrong time. 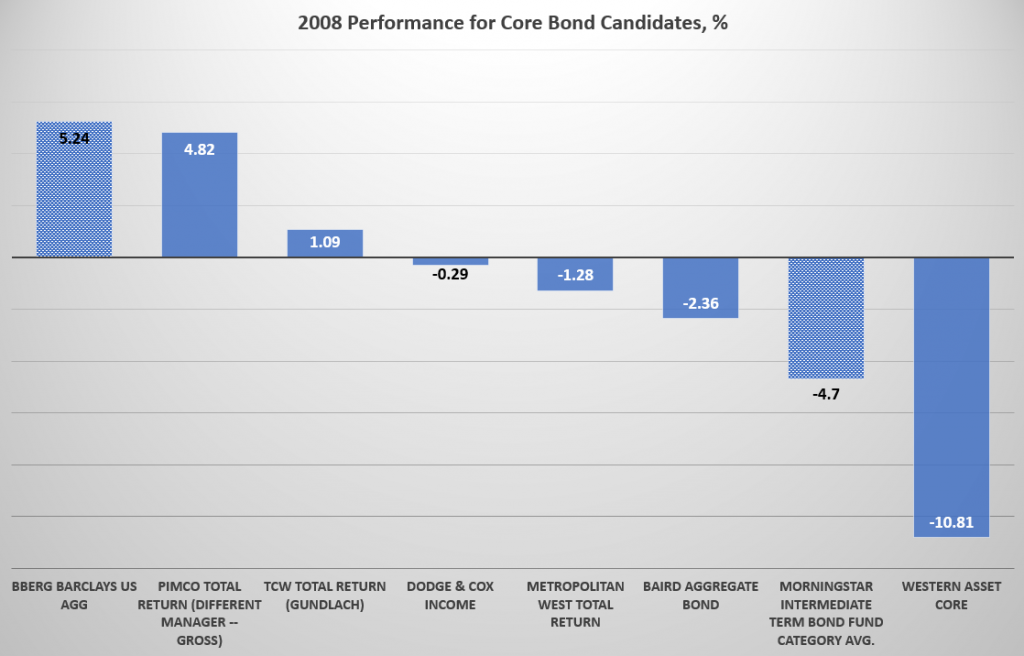 PIMCO Total Return was the best performer in 2008, but those were the days when Bill Gross was at his peak. For the past five years, the fund looks more like the index in terms of its returns and volatility, but its new management team doesn’t own that entire record. Mark Kiesel, Scott Mather, and Mihir Worah have led the fund for a little more than 4 years, since September 26, 2014, and the fund’s 2.53% annualized return for the three years through January 2019 is better than those of most of its peers and than the index’s 1.95% annualized return.

Dodge and Cox Income was its usual solid self, with a 2.91% annualized return and a 0.90% Sharpe Ratio. During the crisis it lost 29 basis points, much better than the nearly 500 the average intermediate term bond fund lost, though behind the 5.24% return of the index.

Baird Aggregate has been solid as well. It has produced a 2.84% annualized return for the recent five-year period with a 0.76% Sharpe Ratio. In 2008, it dropped a little more than 2%, better than the category average, but worse than the index.

Incidentally, it’s interesting to note how the Morningstar fund category average differed from the index in 2008 (-4.7% for the category average and 5.24% for the index). That divergence results from the fact that the index is U.S. Treasury-heavy, and Treasuries did well in 2008. The average fund, however, often tries to beat the index by owning lots of corporate bonds or by taking another credit risk. And that was decidedly the wrong move in 2008 when the safest securities were the most loved.

There are other funds we could have included here such as PIMCO Income, Loomis Sayles Bond, Delaware Diversified Income, BlackRock (NYSE:) Total Return, Guggenheim Total Return, JPMorgan Core plus Bond, and Lord Abbett Total Return but we had to make the cut somewhere for this article. We monitor those funds and others routinely, and so should other advisors who aren’t fully dedicated to passive funds.