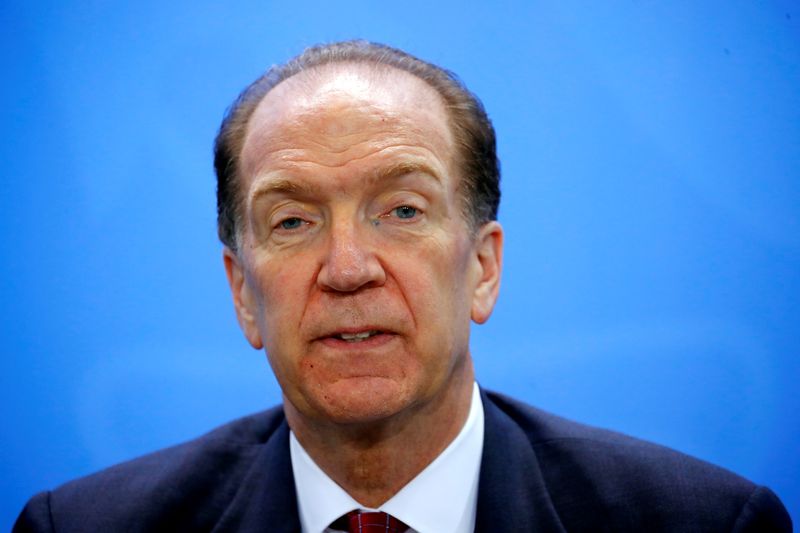 WASHINGTON (Reuters) – Some G20 creditor countries are reluctant to broaden and extend another year of coronavirus debt service relief to the world’s poorest countries, so a six-month compromise may emerge this week, World Bank President David Malpass said on Monday.

Malpass, speaking to reporters as the World Bank’s and International Monetary Fund’s virtual annual meetings get under way, said G20 debt working groups have not reached agreement on the two institutions’ push for a year-long extension of the G20 Debt Service Suspension Initiative (DSSI).

“I think there may be compromise language that may be a six-month extension (and) that it can be renewed depending on debt sustainability,” Malpass said.

Finance ministers and central bank governors from the G20 major economies are scheduled to meet by videoconference on Wednesday. In May, they launched an initiative to allow poor countries to suspend payments on official bilateral debt owed to G20 creditor countries until the end of 2020, which Malpass said has freed up $5 billion to bolster coronavirus responses so far.

Malpass and IMF Managing Director Kristalina Georgieva have been warning that far more debt relief is needed for poor and middle-income countries, including principal reduction, to avoid a “lost decade” as the pandemic destroys economic activity.

Malpass said the two institutions would propose a joint action plan to reduce the debt stock for poor countries with unsustainable debts.

But he said debtor nations were too “deferential” to creditor countries and needed to more forcefully demand a smaller debt burden. “That dialogue hasn’t been as robust yet as I think is necessary to move this process along.”

A new World Bank debt study published on Monday showed that among countries eligible for the G20 debt relief program, external debt climbed 9.5% in 2019 to $744 billion before the pandemic hit.

The poorest countries’ official bilateral debt to G20 countries reached $178 billion in 2019, with 63% of the total owed to China. The study said China’s share of this debt stood at 45% in 2013, the year Beijing launched its global Belt and Road infrastructure drive.

Malpass said the debt service suspension initiative has ramped up more slowly than expected because “not all the creditors are participating fully,” including China.

He said he wanted to see China’s participation in the debt service suspension initiative broadened to more state-sponsored creditors, adding that many of those already participating have only deferred principal repayments but were still collecting interest.

Facebook
Twitter
Pinterest
WhatsApp
Previous articleChart Of The Day: Is The Dow Headed To 25,000?
Next articleU.S. housing market stuck in soft patch; confidence rises By Reuters