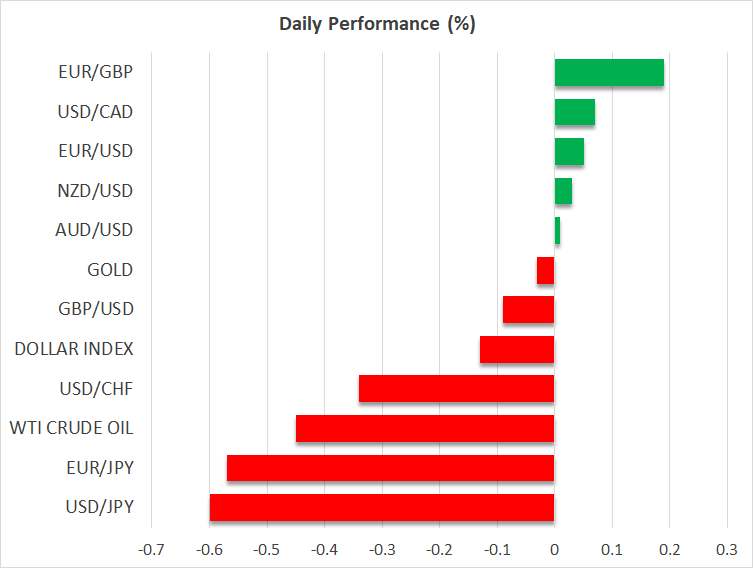 The back-to-back meetings of NATO, G7 and EU leaders in Brussels on Thursday may have been a great show of Western unity against Russia’s actions in Ukraine, but they changed little when it comes to how soon the conflict will end. And whilst the war uncertainty looks set to drag on for some time, there was at least some relief for investors that the European Union decided against banning the import of Russian , for now.

With inflation rates around the world skyrocketing amid the surge in most key commodity and raw material prices, the EU’s decision not to add to its long list of sanctions against Moscow has offered some respite to the markets. There is a growing fear of recession, not just in the euro area but globally too, the longer these price spikes last and the more amplified they become.

NATO is doing everything it can to support Ukraine without getting itself entangled in a direct military confrontation with Russia. But the downside of that is a potentially long drawn-out war and subsequently, a prolonged market fallout.

Oil prices pulled back yesterday after hitting two-week highs as no new significant economic measures were announced by the US or the EU. WTI and futures were extending their declines today, sliding by more than 2%.

Moreover, the US has agreed to increase its supplies of liquefied to Europe, easing the continent’s energy crunch. The euro is a little firmer today, crawling above $1.10, and is the only notable gainer along with the yen.

The Japanese currency was rebounding on Friday, snapping a five-day losing streak against the US dollar. Against other currencies, like the Australian and New Zealand dollars, the tally of daily losses is even bigger.
Today’s dramatic swing could just be a long overdue correction after the colossal losses over the past month, but there were some other triggers too.

The Bank of Japan has yet to intervene in the bond market even though the yield on 10-year Japanese government bonds has hit 0.24% today, just 0.01 percentage point away from the upper target band of its yield curve control policy.

This could be an indication that the upper band has become a loose target for the BoJ and policymakers will possibly allow the 10-year yield to rise a little above 0.25%. The yen’s recent freefall could be one reason why the BoJ is having a rethink and is something that has already caught the attention of both Governor Kuroda and Japan’s finance minister.

The firmer yen and euro weighed on the , which was marginally lower today, though the greenback was broadly higher against most other major currencies and is headed for weekly gains.

Sterling slipped back below $1.32 after UK retail sales unexpectedly fell in February as consumers were being squeezed by soaring fuel prices. Growing expectations that the Fed will tighten more aggressively than the Bank of England have been adding to the pound’s woes on top of the Ukraine impact.

Minneapolis and Chicago Fed presidents, Neel Kashkari and Charles Evans, sounded less keen on a 50-basis-points rate hike in May than their peers in comments yesterday. But with weekly jobless claims in the US hitting the lowest since 1969 and the Fed seen to be well behind the inflation curve, a 50-bps hike is looking more likely than not at this point.

Mixed end to the week for stocks

In equity markets, European stocks were modestly higher but still on track to end the week down. Asian markets were mixed, though Japan’s just notched up its ninth straight session of gains, likely boosted by the weaker yen.

On Wall Street, US futures were flat after Thursday’s strong gains. With negotiations between Ukrainian and Russian officials progressing at a snail’s pace, stocks seem to be taking their cues from the relative outlooks for each economy. That probably explains why despite the Fed’s increasingly hawkish stance, US equities have been performing somewhat better than European ones as the Ukraine crisis unfolded. 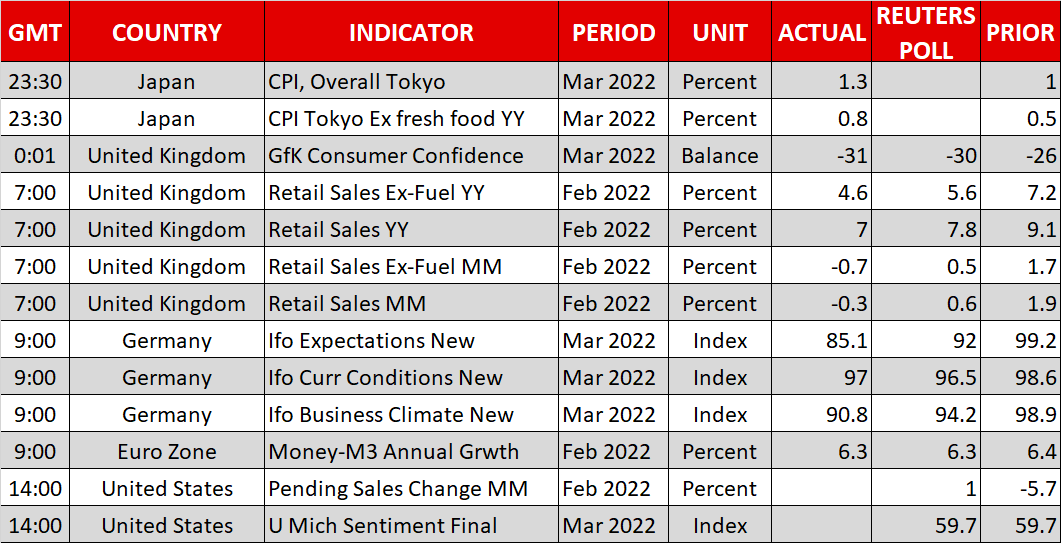