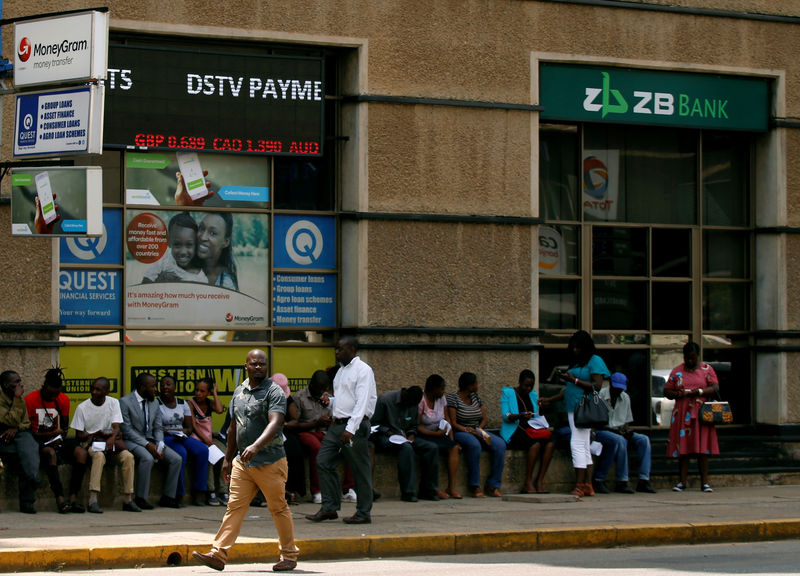 © Reuters. Zimbabweans queue outside a bank in Harare

HARARE (Reuters) – Zimbabwe’s new currency was stuck around 2.5 to the U.S dollar on Tuesday as tight restrictions on trading and exchanging it remained in place despite a central bank pledge to let the RTGS dollar trade freely.

Zimbabwe abandoned a discredited 1:1 dollar peg for its dollar-surrogate bond notes and electronic dollars last week, merging them into a lower-value transitional currency called the RTGS dollar in an effort to ease chronic cash shortages.

Economists welcomed the move but have urged the government let the RTGS fluctuate as it has promised.

On Tuesday, banks were only selling U.S. dollars to corporate clients and individuals with invoices or receipts for imports deemed a priority such as fuel and medicines.

Finance Minister Mthuli Ncube told Reuters in an interview on Monday that the market should determine the RTGS exchange rate, but that the government wanted to avoid excessive volatility.

Tellers at two banks in downtown Harare said they could help clients make purchases from overseas at a rate of 2.5625 RTGS to the U.S. dollar, the rate that other banks offered on Monday.

Banks were not yet selling U.S. dollars to individuals in cash, and neither was a bureau de change at the Road Port bus station.

“The Reserve Bank of Zimbabwe (RBZ) hasn’t given us any U.S. dollars in cash yet,” a teller at a CABS bank branch said.

The state-owned Herald newspaper reported that Botswana had offered to lend Zimbabwe $600 million to support its diamond industry and private firms.

A currency dealer said the RBZ had authorized banks to buy and sell foreign currency 2.5 percent either side of the rate of 2.5 RTGS at which the central bank has sold U.S. dollars to banks in recent days.

Exchange rates on the black market for the bond note – which many ordinary Zimbabweans still use in shops – were at 3.6 to the U.S. dollar, unchanged from Monday, informal currency traders said.